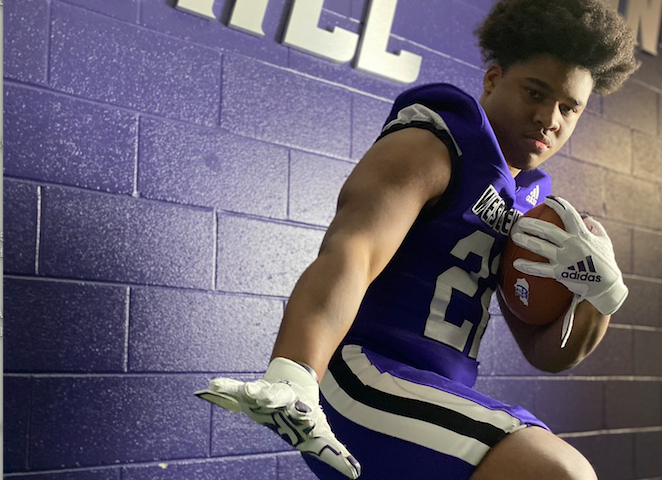 We don’t have the industry this morning to comb through our Twitter feed and credit the Owensboro media outlet that called Kentucky Wesleyan’s in-state ’21 class a compilation of “Kentucky All-Stars.” Suffice it to say we wholeheartedly agree. Whoever they were; they nailed this projection.

We have been covering a small-school migration of D-1 talent owing to the present global health crisis pledging to outstanding Kentucky programs below the D-1 level. Many teams in Kentucky below the D-1 level are feasting on in-state talent which in any other year probably finds its way on either a FCS or FBS-level roster. Well, Coach Craig Yeast, and his staff, just figuratively remarked, “Hold my beer!”

In a period of a few days, the Panthers out of NCAA Division II grabbed commitments from two highly sought after Kentucky products out of one of Kentucky’s most storied high-school programs, Louisville Male. In this article we want to break them down individually and give some analysis of where we think they project together with links to their senior year highlights. We will start with the prospect who committed first, VJ Anthony.

Anthony is a kid who is 17-years old, making him young particularly for his graduating class. As such, he’s a “measurables” kid with off-the-charts “upside” who may literally blossom into anything he’s willing to work toward becoming. Anthony projects as a TE according to most of the coaches with whom we have personally talked about him. All agree his best football is still ahead of him.

Anthony played a lot of LB in high-school so there is literally zero fear about his coming across the middle and catching late-down footballs with LBs and or Safeties bearing down on him. He is 6-2 (and still growing) and weighs a chiseled 230-pounds, running the 40 around the high-4.8s to low 4.9s. More important than his 40-time, particularly as a TE, he shuttles in 4.3-seconds, making him both “quick in space” and possessive of sufficient “change of direction” speed to work himself free between the 2nd and 3rd defensive levels and/or across the middle matched up with LBs.

This is a huge get for the Panthers. No telling how huge this get will get under their supervision and coaching.

Next up…Jaylin “The Boss” Bross.

No one was surprised when UTMartin (FCS/OVC) swooped through Louisville and offered this RB between his junior and senior seasons. If you look at the offer history at UTM and the RBs on the roster, the 5-10, 205-pound, barrel-racing quarter-horse of a RB is exactly what Coach Simpson regularly recruits at the position.

This is a kid who probably ends up in Martin but for the global health crisis and the uncertainty surrounding who’s coming back, who’s transferring in, and whether the NCAA is going to grant teams relief from scholarship limits. We have before discussed this ad nauseam, we will refrain from going through it once more.

Bross has a 4.2-shuttle, is built low to the ground and runs behind his pads, and has a natural RB-instinct where he sees running lanes lesser-backs miss. He led Louisville Male in scoring (130-points…19-rushing TDs, 1-TD reception, and 5 two-point conversions), yards from the line of scrimmage (1,077-yards, 119-carries in 10-games) and leaves Louisville Male a member of the exclusive 3,000-career rushing yards fraternity.

No telling where his career numbers would have ended were he given back the 5-games robbed from him by the pandemic. In his last, un-altered, full-season (2019), Bross rushed for nearly 1,700-yards and helped lead Male to the 6A Championship Game, where he and his cohorts returned again this year.

This is a kid who could well push for immediate starter’s reps. It will be difficult to keep him out of the lineup, freshman or not.

Congratulations to both these young men. Congratulations even further to the coaching staff at Kentucky Wesleyan for realizing you have to be able to lure D-1 talent to D-2 if you want to compete for championships at the D-2 level AND for being able to get out and do just that.