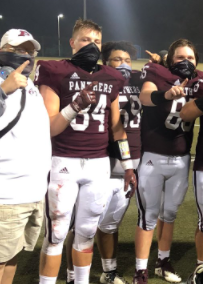 Thornsbury wears number 59 at Pikeville High School. He was number 44 at Mingo Central a year ago and, according to the roster filed with the KHSAA in 2018 by Belfry, number 79 the year before that, as a freshman. He appears, looking through online pictures, to have worn “44” some at Belfry too.

Three years, three numbers, three schools, for one very good high school football player….that about sums it up pretty well. After Thornsbury’s Pikeville team was able to beat Belfry in what had to have been an emotional win, we interviewed a player we have called “Big Baby” (as a complement) since he was a baby-faced, eighth grader with the body and game of a grown man. Thornsbury had lots to tell KPGFootball.

We were able to catch up with Jacoby Thornsbury about this, his junior year, playing back in Pike County; this time for reigning 1A, 2019 KHSAA football champion and favorite to repeat in 2020, Pikeville High School. This interview was post-Pikeville beating Belfry. Belfry is the reigning 3A champions.

Pikeville also won last year’s game, which didn’t stop Belfry from rebounding and winning it all. It likely won’t again this year either. Many expect Belfry to do it again this year.

That game, which Pikeville won by 6 at home, was even more important to “number 59” than perhaps any other player on the field. After the game went to “final” the emotion seemed to wash over the big fella. There are reasons for that aside from his having formerly played on Pond Creek.

Coming into the game, Thornsbury heard the jibes and sneers about him and his play from some online, keyboard assassins who tend to crowd message boards and fan sites. Some claimed he had transferred around because he couldn’t make it on Pond Creek. Some insinuated he played at a more robust weight than Belfry defensive linemen were permitted.

Jacoby Thornsbury heard every comment. His teammates heard every jibe, jab, and barb. Pikeville football, and its stalwart NG, would answer these critiques where answers most matter, on the field and on the scoreboard.

We asked Thornsbury about transitioning into his third program in three years. We asked him what, if anything, has made the transition easier. He told us, “coaching.”

Thornsbury expounded by responding, “Coaches Allen and Davis, who coach the offensive and defensive lines, have really focused on me and pushed me to improve, on and off the field. I really needed that.”

The push appears to be working well. Thornsbury, through the team’s first 3-games (3-0), has 16-tackles and 2-TFLs playing NG in the middle of the Pikeville front.

At 6-2 and weighing 296-pounds, “Big Baby” is a load to dig out of the hole even when he isn’t making the tackle. For a NG, he’s making loads of tackles.

He isn’t playing exclusively on defense like at the other two programs providing him varsity roster spots previously. Jacoby has rotated in along the offensive front so far this year at both right guard and offensive center.

As a high schooler, Jacoby is (for the most part) a defender. That aside, we could see colleges wanting to see more of the center experiment; where he could project at the next level.

We asked him the difference between the high school game in Kentucky versus what he experienced across the West Virginia state line at Mingo Central. He told KPGFootball, “I have had to get reacquainted with the speed of the Kentucky game.”

Thornsbury, in further response to our question, elaborated, “Kentucky football, or what I have played of it, is both bigger and faster. It took me a couple weeks just to get reacquainted to the Kentucky game because of the difference.”

We asked him what made the transition easier for him. He told us, “coaching.” Thornsbury continued, “Coaches Allen and Davis, who coach the offensive and defensive lines, have really focused on me and pushed me to improve on and off the field. I needed that.”

We asked him to compare Pikeville to the other places he has played. He told KPGFootball, “Pikeville gives me an opportunity to take my game ‘next level.’ They have great coaches and an endless stream of resources for the players. The most important difference is, at Pikeville, I am getting to play without looking over my shoulder at who may be coming in to replace me every so many plays. We have a rotation, but for the most part, I haven’t come out much nor have I taken any plays off when on the field.”

KPGFootball asked Thornsbury what his role on the Paintsville defense is, at least as he sees it. He told us, “I am a run stopper, mostly. However, playing against the passing offenses we have seen and particularly our own offense which I see in practice, has made me develop more moves as a pass rusher and I have had to learn to use my hands more often and more violently to shed blockers. I have more to my pass pressure game now than a swim move and a bull rush.”

He told us, “Having to face an Isaac McNamee led offense every day in practice is tough but it develops me. Having to butt heads with Mason and Peyton Sayers and facing Landon Hammock in practice daily provides me tougher situations and looks. Often it is tougher in practice than on Friday night. We all make each other better.”

Jacoby Thornsbury is one of the elite NGs in Kentucky High School football. He is having a great season and is growing into the player we predicted he would be coming out of middle school as one of Kentucky’s “brightest” Future Stars. We will continue to enjoy watching him perform, every Friday night, for a team through whom the 1A state title has to travel.

What we won’t be doing is making any cute commentary about his football physique, industry, or attributes. We wouldn’t recommend any of you do it either. Those type things can come back and bite you right where the sun don’t shine.