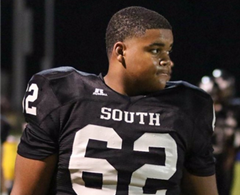 Jacob Lacey is a two-sport athlete from Bowling Green, Kentucky and guess what? He’s really good at both sports. In fact, it has been reported he would love to play either pro football or baseball. I don’t know much about his ability on the Diamond as I don’t cover that sport. However, I wouldn’t recommend brushing him back off home plate, if it were I…just saying. As for football, at least one National Recruiting Service, 247Sports.com, has Crystal Balled him to the Fighting Irish of Notre Dame. I must confess, as a Catholic, the prospect of him in South Bend is one of which I am certainly fond. Lacey has been offered by about everyone of significance from Tennessee to Kentucky to Michigan. Wherever he should go, he wants to major in engineering which his 3.7 GPA, and membership in South Warren’s Beta Club, suggests him being entirely capable.

As a football player, there really aren’t enough glowing praise I can give the young man. I have had both the opportunity and privilege to watch him in person and on film and he is a backfield disruptor of the first order. Lacey comes off the ball with incredible get off quickness and is able to deftly use his hand punch, rip and swim to gain almost instantaneous admission into the opposing offensive

backfield. Once there, he is strong enough to meet anything coming at him and fast enough to make plays from sideline to sideline. I, only somewhat jokingly, suggested he is in the opposing backfield with such frequency I thought he was playing running back. I find that to be a funny concept. I have no doubt OL Position Coaches, forced to contrive means of denying Lacey admission into its own offensive backfield, aren’t as amused by that commentary as I. Finding volunteers for the unenviable  task is a challenge I would wager.

What may be even more important about Jacob Lacey, and also most refreshing, is from all reports he is a tremendous citizen, Christian, and just a fantastic young man who positively impacts those with whom he comes in contact off the field. Those he contacts on the field…well, their reports of his amiable nature are not so glowing, but, then again, what would you expect? Football is a collision sport. Jacob has been rated as a 5.8 4 Star on Rivals but I have seen him rated as a 5 Star prospect on many other services. All I can say is from Clemson to Notre Dame to Michigan State, Lacey has a 5 Star offer sheet. At Kentucky Prep Gridiron, we believe the football factories analysis of a player, by people substantially paid to be correct and for whom misjudgment is often penalized with a pink slip, is worth more to us than what some recruiting service might think.

KPG believes this 2019 prospect from South Warren High School is a first-team All-State selection this year as a Junior, after having made the 2nd team last year as a sophomore and that Lacey has the tools, intellect, explosive power, and athleticism to have a dominant year in the Commonwealth’s Class 5A. Remember ballers…PLAY THROUGH THE WHISTLE!