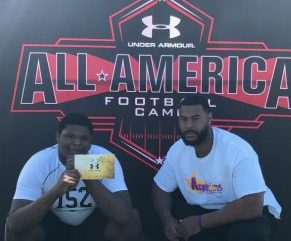 I don’t know how far back some of your memories go but we wrote an article about Kiyante Goodwin on April 23, 2017. The article pertained to his being selected to go the Under Armor Next Game. We told you we tend to not write about kids until they are transitioning from 8th grade to high school because most kids entering 8th grade are not far enough along physically to forecast much about their prospects. We also told you we were writing about Kiyante because, at 6’6″ 342 lbs., we felt like he had progressed enough physically to go out on a limb and forecast he was a College prospect notwithstanding his youth and very much worthy of our coverage.

Kiyante then played in the Tennessee-Kentucky Future Stars Classic in Clarksville, Tennessee for the 7th grade Kentucky Future Stars team. I remember shaking his hand and remarking to Chris Vaughn, with whom he trains, that Goodwin shook my hand like a grown man and not a 7th grader. I believe I wrote about that very encounter when I reported on the camp for Teams Kentucky (7th and 8th) while down at Murray State University.

Well, it would appear the University of Kentucky decided we at Kentucky Prep Gridiron were sufficiently informed and knowledgeable to place some weight on our analysis. It is being reported this evening the University of Kentucky has decided to pull the trigger and offer Kiyante Goodwin who is set to enter the 8th grade at Oldham Academy in Louisville this Fall. This is both a testament to middle school football and the Kentucky Future Stars team as, once again, a Kentucky Future Star garners a Power 5, FBS, offer shortly after showcasing his athletic wares on what is a very bright and prestigious stage.  KPG congratulates Kiyante on snaring an offer to play for the Big Blue and reminds ballers everywhere to…