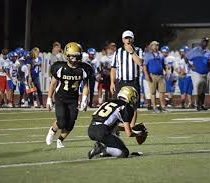 We here at KPGFootball would like you to notice our title up above wasn’t phrased as an inquiry. There is a reason for that. It is because the statement that Jackson Smith is the Country’s best place kicker in the class of 2022 isn’t really a disputed question in a lot of circles. He is undisputedly the best Kentucky has in the class of 2022. I mean, he did win the Luis Zendejas at the Country’s top All-American game this past December in Dallas, Texas (Bret Cooper Junior All-American Game). He did hit a 51 yard field goal in a middle school State Championship game after having also been true from 27 and then 38 yards prior to converting from 51. I will tell you this, at the Bret Cooper game, as I was on the East All-American team’s coaching staff, many of us thought he was the surest bet on the roster to get offered to play FBS, power 5 football; and we had Ty Simpson on our roster at QB. Simpson, since playing for us in Dallas has been offered by Michigan, Indiana, and the University of Kentucky. I will let you in on another little secret about Jackson Smith which says a lot about the kid’s mettle and toughness. Our defensive coordinator in Dallas, Steven Kelley, thought Jackson Smith might well have been among the best linebackers on either roster in the All-American game. Jackson Smith is one tough son-of-a-gun; but, then again, not a lot of wimps around Danville, Kentucky.

For some reason, and we are pretty bummed about it, Jackson has elected to sit out the Tennessee-Kentucky Future Stars Classic this summer at Georgetown College. This is particularly upsetting considering last year’s contest was largely decided by Ben Scholfield’s (The Schofield Leg Rocket) field goal from 35 or so yards with pressure all over him. Schofield benefited from a brilliant placement, after a not so brilliant snap, as Kentucky prevailed in the 8th grade game for it’s second consecutive victory in the series 17-14. At the time Schofield kicked the field goal, it gave Kentucky a 10-7 lead deep in the 3rd quarter.

Now for those who don’t know, they play a little football in Danville, Kentucky with Danville High School (2A) and Boyle County High School (3A) both winning State Football Championships in their respective classifications. Legendary  high school head coach, Chuck Smith, whose son Brandon, at South Warren, is proving to be quite a coach himself, won his 6th Title last year and has played for a State Title 12 times. In Jackson Smith, Chuck Smith is getting a player KPGFootball is willing to bet Coach is excited about having for the next four years. The way they play defense at Boyle County, if they can cross midfield, Jackson is liable to win them a lot of ball games. There is nothing like having a spare three points lying around any time you get inside the 35 yard line. It is like finding money in the pants’ pocket of the britches which just came back from the dry-cleaning.