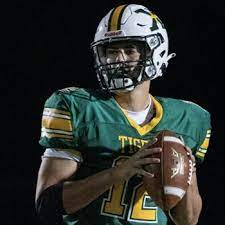 Jacks Sivori, St. Xavier’s dual threat, ’22, 5-11, 185-pound QB, has taken a serpiginous route back to under center for the Class 6A Tigers. This past Friday night seemed to prove Sivori is back at 100% and perhaps better than ever.

Now when we discuss dual-threat QBs, players who can hurt you a number of ways but primarily with their arms and legs, Sivori has to rank among the very best in Kentucky. Friday night in Owensboro, Kentucky, with top dual-threat guy the commonwealth has to offer in Gavin Wimsatt, the show-down between the two was an all you care to eat buffet.

Let’s just say diners came away fully satisfied. There wasn’t a word spoken at the table while the assemblage gorged themselves on the feast.

It wasn’t easy to get to Red Devil Stadium for the ’21 season opener for Sivori. Sivori suffered a torn labrum which required surgical intervention. Obviously, from his performance against Owensboro, he took the procedure well.

His rehab from that had to be vigorous. He took it also in stride.

Sivori suffered a high ankle sprain from which he had to heal. High ankle sprains can be really slow healers and can nag and impact performance for a long time.

Friday night, against a defending Class 5A finalist in Owensboro (Senior) High, we are sure there were some anxious eyes waiting to see if Sivori had really returned. Judging by the performance seen and experienced, the Tigers should feel confident about the season going forward.

Sivori was 7 for 10 through the air for 101-yards and 3-thrown TDs. That alone was efficient, effective, and even surgical work executing the throw-game. On top of all that, Sivori rushed the football 16-times for 186-yards and scored another 3-TDs carrying the pigskin over the goal-line.

St. Xavier, largely owing to the above detailed effort, beat the Red Devils, in Owensboro, Kentucky, 51-38. The Tigers will be on the road again this coming week, though still in the Derby City, when they travel across-town to play Central High School before entertaining the classification’s top-ranked squad, Male High, the week following.

If the Tigers can get by the next two weeks, particularly the home date with Male, it is difficult to see them losing this year. Anyone can win the huge yearly match up between Trinity and St. Xavier, set for September 24, 2021, but with the status of Trinity’s graduation decimated roster, we like St. X in that game too.