Today at the Stadium of Champions beginning at 3:00 p.m., in what has been forecast to be perfect weather, the game originally contracted to be played last night will get underway. It is a pivotal game for each team going forward though it has zero play-off implications for either. Caldwell County is a 3A team and the favorite to win its District and Hopkinsville is a 4A team and thought to win its District too, though Madisonville North-Hopkins 50-7 thrashing of Murray last night may give some cause for concern. I thought it would be fun to break down today’s match-up and give some thoughts on how we see this match-up resolving.

Quarterback Play-Both teams are hoping to get consistent play from its signal caller. Joby Jaggers has taken over for Shane Burns who decided, way back in June to forego his senior year of football to concentrate on baseball. Shane had passed for nearly 6,500 yard and 71 TDs over his career through his Junior season, so replacing him has been no small chore. Jaggers, so far, has led his Tigers to a loss to Christian County and a win over a Graves County Team that beat 6A McCraken County last night 38-22. Though Jaggers has been under Center, one really can’t say the win over Graves was much attributable to anything the offense did as the Defense accounted for 3 pick sixes. Jay Bland, who like Jaggers has had big shoes to fill taking over for a quarterback, in Jalen Johnson, who was District POY his sophomore and Junior seasons and, who like Burns, decided to forego his senior season to focus on another sport (Basketball at Aspire Academy), has struggled, and so has his young offensive line. Of course, Jay Bland has played South Warren and its Notre Dame committed, stud, inside technique, D-lineman (Jacob Lacey) and a Mayfield team which beat Paducah Tilgman last night 47-14, beat HHS 49-20, and beat West Tennessee perennial powerhouse, Union City 41-0 in Union City. South Warren plays today but, by kickoff, this game with Caldwell today maybe the first opponent the Tigers have face thus far to have been defeated anytime this year, by anyone. Bland has shown he can throw it, if he can get some protection. 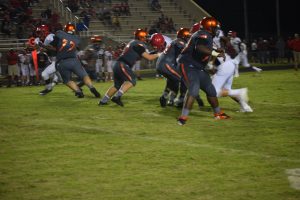 The Offensive Lines- HHS is now starting a Junior at left tackle, a freshman at Left Guard, a senior at Center, a Sophomore at Right Guard and a Junior at Right Tackle. The Tigers from HHS will go Schutt (290), Long (250), Hawkins (250), Grubbs (205), and Mallory (295) across its front. Coach Ezell, who steers the Offensive Line as its position coach, hopes the added bulk and seniority will translate into a better ability to get down hill in the run game. All of the issues running the ball can’t be laid totally at the feet of the line as the RBs haven’t done themselves any favors hesitating as opposed to hitting holes confidently. Bottom line, HHS has to run the football to have success offensively and no one knows this better than the position Coach (Ezell) and Head Coach Craig Clayton. For its part, Caldwell County’s defensive line was pounded on the ground by both Christian County and Graves, but particularly Christian County. If HHS’ problems running the ball were the fronts it faced, then it is only fair to attribute some of the problems Caldwell has had stopping the run to the teams it has, thus far, faced too. As for Caldwell’s offensive line, it needs not only to be more successful running the football but it also needs to better protect Jaggers and give him an opportunity to find one of the Rileys down field.

The Defense-I am not sure what to say about Coach Dustin Lopez’s defense other than it has been on the field way too long, and it has been left in precarious positions by the offense too many times. The Defense has looked pretty good in spots but it has played two straight, well-coached and polished Offensive ball clubs. I guess we will see what South Warren is or isn’t when the Spartans face the team which beat them last year in the Regional Finals, Franklin-Simpson, but, after putting 35 points on HHS (though not all on the Defense), South slapped 43 on Warren Central, so how bad can they be? As for Mayfield, their offense has scored 41 on Union City, Tennessee, 34 on HHS (two pick 6s=49 total), and 47 on Tilgman last night. Caldwell County’s offense managed one touchdown against Christian County in a 27-10 loss and beat Graves County 28-10 with only one of those TDs mustered by the offense, Caldwell County benefitting from three pick 6s in that game. It is important for the HHS defense to see what it can do in a game where its Offense pitches in and does some work running the ball and controlling the clock. I suspect HHS isn’t as bad defensively as people just gazing at scores might believe. As for Caldwell County, though it has given up significant yardage on the ground it has bent way more than it has been broken and the pass defense on the backend has been stellar.

There are some big games today which have implications for teams we regularly follow, St. Xavier plays Bowling Green today at 11:00 a.m. CST in a game which has been made more important by the fact PRP put it on the Purples last week. The Purples have Owensboro upcoming (who beat the fire out of Owensboro Catholic last night 47-12) so the road doesn’t seem to be getting any easier. If Bowling Green is to defend, they need to regain their feeling of invincibility. South Warren plays Franklin-Simpson today in a game which also kicks at 11:00 a.m.

I hope you get out today and enjoy a rare opportunity to watch Saturday afternoon High School Football. This is Fletcher Long reporting for Kentucky Prep Gridiron reminding you to PLAY THROUGH THE WHISTLE!