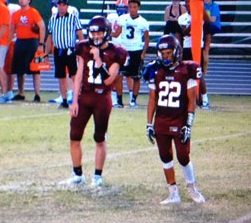 High School Football programs are cyclical. Sometimes they are very good and sometimes they struggle. It really is dependent on what you have walking your hallways and whether you can get the talent in the hallways to join you on the gridiron. Madisonville North-Hopkins High School is sporting some impressive former Kentucky Future Stars walking its hallways and the prospects appear pretty bright in the city considered one of the gems of the Western Coal Fields region of Kentucky’s Commonwealth. There are a pair of prospects who played for LaKunta Farmer’s 8th grade Kentucky Future Stars team in the Tennessee-Kentucky game this past summer and are getting Varsity Playing Time for the Maroons.

One of the brightest and most athletically gifted of the freshmen is DB/Return specialist Davyon Vanburen. Davyon is a 5’7″ 140 pound player who figures to get faster as he lengthens and weight trains but who runs the 40 in 4.9 seconds now, which is pretty fast for a 9th grader. Vanburen played at Browning Springs Middle School for Head Coach Tyrone Gregory and helped the Bears to a Conference Runner-up finish last Fall. In Middle School, Vanburen played WR/HB/QB and Safety. To translate what that means, Coach Gregory played Vanburen pretty much anywhere he could use a fast, quick, and skilled athlete. Kentucky Prep Gridiron believes Vanburen will settle in at the High School level as a DB/RB Iron Man player. When asked for comment on his former player, Coach Gregory said that Vanburen is one of the best natural athletes in the area with a lot of football potential to play both sides of the ball. For the Bears, he was our home-run threat/big play guy.

Jay Burgett has been right impressed with Vanburen as the young special teamer has already scored two Varsity TDs in his limited capacity in only the first three games. So far this year, Madisonville has lost to Owensboro High School but rebounded nicely by beating Marshall County 42-29 and Murray High School 50-7. This makes Madisonville North-Hopkins, at least to this point, the early favorites to win the Class 4A, District 1 Title which includes Hopkinsville High School, Calloway County, Hopkins County Central and Logan County in addition to the Maroons.

Davyon Vanburen is just another example of the skill and ability we are seeing coming up from the Middle School ranks and Plugging-in to our Varsity lineups. Vanburen and Flener are also excellent examples of how well the Future Stars program in Kentucky, spearheaded by Ricco Hughes, is identifying which rising freshmen each year are adapted to becoming not just Future, but often times even Present, High School Varsity star players. In the three years I have been following Ricco’s Future Stars program, I can’t think of a time he has missed. He certainly didn’t appear to miss this time.