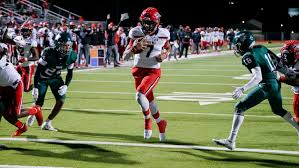 It was win or go home, Friday night in round-three (Regional Championships) and we were handing out regional hardware at the end of these games. Playoff performances make more of an impression on us at the magazine than regular season production.

Leetavious Cline (2021) did it again for West Carter Friday night in his team’s 43-6 undressing of Walton-Verona. Cline rushed it 23-times for 180-yards and 4-rushing TDs. Orry Perry (2021) was the very model of efficiency much like all season. The senior signal-caller completed 6 of his 7 passing attempts for 198-yards and a pair of TD completions. Gavin Gibson (2021) came up huge. He recorded 12-tackles with a TFL and a FF to go along with recovering the fumble he forced.

Henry Jackson (2021) had a big night in KCD’s game with Crittenden County. He had 11-tackles on the night and one of the two TFLs the defense registered on the evening. KCD beat Crittenden County 35-7.

Dual threat QB extraordinaire, Cameron Hergott (2021) had quite a night against Breathitt County in the Regional Finals. He ran the football 10-times for 240-yards and 3-rushing TDs and was a perfect 6 for 6 through the air for 120-yards and another 3-scores. On the year he was 131-172 for 2,23-yards with 21-TDs and only 4-picks through the air and ran the football 94-times for 885-yards with 12-rushing TDs to lead his team in both categories. Beechwood beat Breathitt County 52-7.

Big time WR, Reece Jesse, Jr. (2021) from Hoptown was the reason Hopkinsville advanced over John Hardin 14-10 this past Friday night according to many who watched the game. Not only did Jesse catch 6 passes for 121-receiving yards and 1 TD but the one TD catch was described as brilliant.

What was told to KPGFootball by one of its western Kentucky agents is that Jesse and the DB both went up for the football and Jesse just significantly out jumped a perfectly positioned DB and practically took the football away from him to come down and finish the jaunt off in the end zone to secure Hoptown its first Regional title since 2004. Treyvon Jefferson (2022) has had quite a resurgence this second-half of the season. He completed 16 of his 25-passing attempts for 262-yards and 1 TD with 1 interception. Next up for Hoptown, Boyle County.

Darius Neal (2021) for Frederick Douglass had a night where his toughness was on full display and the Broncos needed every, single yard. Neal carried the football 22-times for 120-yards on a field best described as “soup” and the Broncos escaped Pulaski County’s Southwestern High School with a 21-20 final score.

Louisville Male’s Jaylin Bross (2021) showed up and out for Male in its Regional Final against McCracken County. Bross carried the football 15-times and gained 145-yards with 1 rushing TD. Daniel Sweeney (2023) chipped in with 9-carries for 94-yards as the Bulldogs chewed up 269-yards rushing on 30-carries with 3-ground scores. Male advanced to the semis winning 40-13.

Louisville Trinity is not the team on which to standout with an individual performance. There are just an abundance of stars on the roster. There were some noteworthy performance in the Shamrocks 56-0 romp over Dixie Heights. Senior, DeAnthony Perry (2021), for instance, recorded both of the Shamrocks QB-sacks on the evening. Senior, Roman White (2021), recorded both of the team’s interceptions returning one to pay-dirt for the “pick-six.”