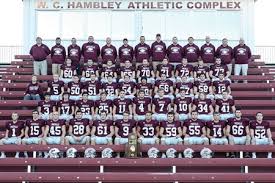 Okay, KPGFootball is not bragging or anything, but for the fifth time this season we have either correctly forecast the margin of victory, or almost pegged the final score of the game literally days before the game gets played. Well, for starters, KPGFootball is most assuredly bragging. Whatever we are doing, whether you find it curious or insipid or not, is obviously working. To refresh your memory on November 4, 2018, we forecast Pikeville would beat Lynn Camp 51-14. The final margin five days later…55-8. Prior to last week, and to refresh your memory even further, we called Pikeville over Hazard by 7 and the final margin was 6 points; in the Tolsia game, we predicted… PHS 47 – Tolsia (WV) 0. Pikeville ended up winning the game, 48-8; we picked Pikeville to beat the Grundy Golden Wave, 47-6, when the actual scored ended up being 47-8; and we predicted Pikeville would beat Phelps, 44-7, and the actual margin ended up being 47-0. At this point, we don’t even believe how accurately we have been able to forecast the outcome week after week. Let’s stay on our proven formula (which we probably should patent at this point) and break down this match-up by looking both backwards and forward and, at the end, we will give you our call as to how we see this resolving.

In discussing the victory over Lynn Camp, which entered the game Friday night 10-1, one just has to applaud the performance of senior QB, Connor Roberts, whom we believe to be among the most potent dual-threat guys in all of Kentucky. Roberts was a spectacular 9 of 12 through the air for 164 yards and 4 passing TDs against one lone interceptions. Roberts also contributed to the ground effort against Lynn Camp, which was nothing short of spectacular as the team logged 269 yards rushing on the night with 3 rushing TDs, by gaining 56 yards on only 4 carries and scoring a rushing TD to go with the 4 he threw. Roberts is making excellent decisions with the football and his offense, which is averaging over 42 points a game, is benefitting both from his leadership and athleticism. On the ground game, which gained its 269 yards rushing in only 20 rushing attempts, the leading rusher was Jesse Sparks who gained 91 yards in 8 attempts and scored a TD, Nate Collins who gained 71 yards in 3 carries with a rushing TD, and, of course, Roberts whose production is above set forth.

The receiving corp, which caught 10 passes on a night where the ball was thrown sparsely, still saw Kyle Watkins catch 4 passes and accumulate 109 receiving yards while catching 2 TDs for scores. Seth Pugh caught 3 passes for 64 yards and Jackson Hensley caught 2 passes for 27 yards with both receptions being scored. Christian Billiter, while he might not have caught a pass thrown by Connor Roberts, did catch one thrown by Lynn Camp’s QB, Eric Mitchell. Biliter’s interception was returned by Christian 45 yards. Otherwise, defensively, the Panther defense, which has only allowed an average of approximately 15 points per game over the first 11 games, shone, once again, in the important category of “tackles for loss.”

The Williamsburg team coming to Pikeville to play our Panthers is 9-2 just like we. The two teams have some common opponents, as the Yellow Jackets beat Hazard this past Friday night, 45-27 (a team we beat by six) and killed Lynn Camp, 72-44 (a team we just beat 55-8), on October 19. Williamsburg also lost at home to the same Painstville team (19-13) with which Pikeville had little trouble when we played Joe Chrico’s Tigers at home on September 7, 2018 (Pikeville won 36-13).

During the game Friday night against Hazard, played in Williamsburg, the Yellow Jackets gained 149 yards rushing and passed for another 268 yards and 4 TDs with only one pass intercepted. One player, Dalton Ponder, pictured to the left of this paragraph, threw for 100% of the 268 yards gained via the aerial game and personally accounted for roughly 72.5% of the yards gained rushing against the Hazard defense Friday night. Ponder gained 108 of the 149 rushing yards, in 14 carries, carrying 2 across the goal line for scores. In all, Ponder threw for 4 TDs, rushed for 2, and had a hand in 6 of Williamsburg’s 7 TDs scored in round 2 of the playoffs. In throwing for 268 yards, Ponder completed 18 of the 27 passes attempted.

Ponder’s favorite target, against Hazard, was Caleb Rose. Rose corralled 8 of the 18 pass completions for 120 yards. Rose also caught 2 of Ponder’s 4 TD passes thrown. Eli Mattingly, whom caught 5 passes on the night, and the other 2 TD passes, had 84 yards receiving on the night. Defensively, what is really to say, as Williamsburg doesn’t post its defensive statistics on the KHSAA website. What we can tell you is Blaine Sizemore had an interception against Hazard and DL, Clay Kysar, forced a fumble he was unable to recover. What would be somewhat concerning to me, where I coaching defense at Williamsburg, would be the 255 points Williamsburg’s defense yielded over its 11 games. Championship football teams don’t have defenses which give up anywhere near that amount of points. Allow KPGFootball to give you some further examples. Last year’s Class 1A, defending State Football Champion, Beechwood, allowed 150 points scored over 14 games, or a fraction under 11 points scored on it a night; Boyle County (3A), in 2017, allowed a fraction over 13 a game to be scored on its defense; Danville, in 2A, allowed 14.53 a night; 4A, Franklin-Simpson, allowed 17.2 for the most yielding defense among Kentucky’s 6 State Champions; 5A, Covington Catholic allowed 7.73 points per game; and 6A, Louisville Trinity, allowed 9.4. So our point is this…one can win a State Championship with a defense surrendering Pikeville’s 15 points a game; BUT, it would be highly improbable for a team which surrenders Williamburg’s 23.18 points per game to win it all playing no better defense than that.

Taking all the above indicators into account, on the year Williamsburg has scored 464 points and allowed 255 in its 11 games, which computes to a scoring average differential of 42.18 to 23.18. As above detailed, the defense allowing over twenty three points a game is an alarming statistic, at least it would be to KPGFootball were we on the Yellow Jackets’ defensive coaching staff. The Panthers’ defense, over the same amount of games, has only allowed right at 15 points a game, while scoring over 42. According to both the Calpreps.com and MaxPreps.com computer algorithms, Pikeville is the 27th best team in all of Kentucky, regardless of classification, and number 2,407th in the nation. Williamsburg is rated 57th in KY and number 4,490th in the country by those same computer algorithms. Somerset, whom Williamsburg lost to 34-7 in Somerset, Kentucky, is close to ranking in the neighborhood of Pikeville in the computer rankings. Somerset is ranked 31st in Kentucky and 2,730th in the country. Williamburg’s other loss was in Williamsburg, Kentucky to a Paintsville team ranked 45th in Kentucky and 3,580th in the land by a narrow 19-13 margin. Now, Lexington Christian is slotted 6 places ahead of Williamsburg in the Kentucky overall rankings and 301 slots above Williamsburg in America. Pikeville played Lexington Christian in Pikeville, on August 25th, and slaughtered Lexington Christian, 50-7. Pikeville is slotted 4 places above Somerset in the Kentucky rankings and 323 slots above Somerset nationally. Williamsburg played Somerset, in Somerset (like it will play Pikeville, in Pikeville) losing by 27 points. Finally, throw into the mix the fact there are real, lingering questions about how good (or bad) Williamsburg is on defense. All of that being said, we believe Pikeville to be 40 points better than Williamsburg and are predicting the following result…