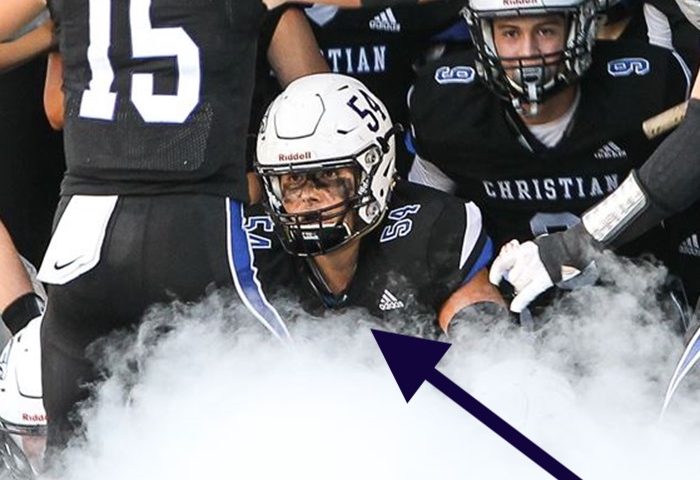 LCA is calling the ’21 football season the “leave no doubt tour.” We haven’t been told this, but KPGfootball believes this is a reference to the blockbuster movie, “Remember the Titans.”

As the movie went, the Titans were going to get whistle-whipped by the officiating crew, and Herman Boone was to be fired, clearing the way for Coach Bill Yost to reinstated as the head football coach at TC Boone. Yost wasn’t in on this plan.

Yost figures out during a playoff game that the fix was in and both Coach Boone and the Titan players are getting cheated. Yost calls timeout and foils the plan. Coach Yost threatens the head referee to take them all down with him if this screw-job continues. Then, Coach Yost calls a TO to fire up the men.

Yost tells them, “All right, now, I don’t want them to gain another yard! You blitz…all…night! If they cross the line of scrimmage, I’m gonna take every last one of you out! You make sure they remember, forever, the night they played the Titans! Leave no doubt!”

The “Titans” went on to a perfect season and state championship in Virginia 3A football and a national runner-up finish. Coach Charles and his Eagles from LCA are chasing a perfect 15-0 and a Kentucky 2A Championship. Where they finish nationally the Eagles will leave to the national voting media.

Teams win championships with players. It is the “jimmies and the joes,” more so than the “X’s and O’s” as former Coach Phillip Fulmer at UT was fond of saying. LCA has well more than a fair share of “jimmies and joes.”

The trenches already feature one of Kentucky’s most highly regarded, interior line prospects in Anthony Johns. Johns is sporting numerous D-I scholarship offers in testament to this fact.

Do yourselves a favor; don’t sleep on Grant Vaught. On any team except the one he’s on, he would be the marquee attraction along the offensive front.

Vaught is 6-3 and weighs 265-pounds. He has plus mobility and change of direction speed. He bench presses 265-pounds, reportedly squats 465, and reports a deadlift of 500, demonstrating excellent “growth potential” once he hits a college weight program.

He lists both offensive and defensive line among his positions. KPGFootball believes his future in college is as an offensive lineman.

We have linked his “Junior” film above under the picture of his doing dumbbell presses. We were impressed with what we saw.

He has tremendous feet. He plays very well in space and is a multilevel blocking stalwart.

The team moves him across the formation frequently as he is the guy they like to lead the play down field. He exhibits both speed and quickness out in front of plays, and in the open field, getting his “hat” on second and third level players in space.

Vaught is a solid finisher. He drives many of his first and second level targets straight through the turf and keeps striking all the way through the whistle. What I mean by that is he doesn’t stand around and watch the action. Once Vaught gets “locked-on,” he’s on you and there really isn’t any escape.

Centre College has already offered this guy. That is an extremely early offer for Centre.

We know what that means. They really, really want him.

The prospect of getting Kentucky’s finest education, and earning its most prestigious sheep-skin, all while playing in athletic facilities Centre is dropping a cool 52-million to renovate, should be very attractive to Vaught. It should be attractive to many other top-flight members of the Kentucky’s ’22 class.

Getting a commitment from this Lexington-Herald, All-Lexington offensive lineman would be huge. Bringing in another class to go along with what the Colonels signed in ’20 and ’21 would catapult the NCAA D-III school into its own “leave no doubt tour.” Well, Vaught will be accustomed to that, now won’t he?