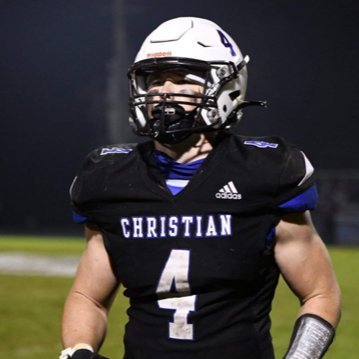 I was in the field house recently at another Class 2A power program, doing some research for an upcoming feature, when I walked up to a young linebacker getting ready to work out. I showed him a picture of today’s feature and said, “Kid, keep in the back of your mind that this is what your rival deploys at your same position. This is your competition and he’s out there waiting on you.”

Now I could have shown him a picture of Tyler Morris, the Navy commit who was wracking up D-1 offers as fast as a man named Carter used to bottle liver pills. However, Morris, who everyone in the commonwealth knows to be both an Adonis and athletic freak show, and of whom I have plenty of pictures, was not the linebacker I chose to show this kid, that day.

I showed him a picture of “the other linebacker.” He would only be categorized as “the other” anything playing for LCA. Selby would be the scouting report’s sole, second-level focus playing anywhere else.

What kind of an athletic-freak show is Coach Doug Charles amassing at LCA? Are you kidding me?

How can there be so much talent on one high school roster? How in the world are they playing 2A football? As we have said many times previous to now, the classification at which a team competes in Kentucky is as meaningless as the statistic, “time of possession.”

To the right, you will see a recruiting placard which the school sent to area college recruiters about Selby. Keep in mind some of his numbers are better than when this particular recruiting tool was published. Underneath, you will find his highlights linked for your convenience.

Now Selby has already pulled an offer from the hottest small-college program going in the commonwealth at present in Centre College. Centre has offered Selby very early in its process. That means they really want him.

He’s also a stud football player. The way Centre has been wracking up classes of late, that is right up their alley too.

Centre is the same program which inked both the Class 4A, KFCA, 2020 Player of the Year and a 3-time AP All-Stater who made the ’21 team on both sides of the line of scrimmage in its ’21 class. That’s just for starters. The Colonels don’t seem bent on slowing its roll any regarding the accumulation of football playing talent judging by its ’22 offers.

Centre recently announced it was dropping 51-million on athletic facilities upgrades. That has built, for its programs, considerable recruiting momentum. Yeah, that’ll do it.

One can easily see why Selby is such an emphasis and cornerstone prospect for Centre’s ’22 class. Selby played both ways for LCA and mightily contributed.

He carried the football 64-times for 253-yards and caught 13-passes for 144-yards and a score in the abbreviated ’20 season. Defensively, he was second on the team with 79-tackles, 5-TFLs, and a sack to go along with both a FR and an INT.

Yessir, Selby is the very embodiment of what many, many college programs would want in a 2nd-level defender. For a program like Centre, he’s a guy to really crave.