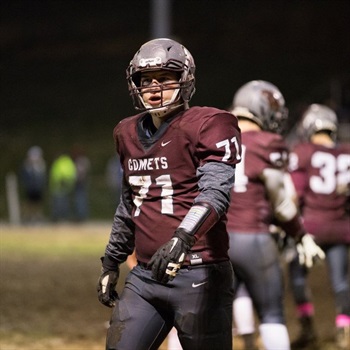 Football isn’t rocket-science; Gibson would be your guy if it was!

West Carter’s Gavin Gibson is a football star. It doesn’t take a “rocket scientist” to discern that reality.

He’s so good at football one might forget he has a 4.0 GPA and a registered ACT score of 35. Yeah, 36 is still the “highest possible score.”

West Carter won the 2A classification’s 8th-district in 2019. They played Beechwood for the Regional Championship and lost, but the overall 9-4 work-sheet was certainly something about which to feel quite good. Head Coach Daniel Barker had to feel pretty good about it.

He also had to feel really good about the performance he got from his star offensive guard and defensive tackle, Gavin Gibson. Gibson is a 2021 prospect with some right impressive numbers.

Translation, Gibson is strong, quick, explosive, and athletic with good speed for where he deploys on either side of the football. When you add in the fact he is probably a “genius,” one can see why he has had the level of on-field success he has enjoyed throughout his career.

Last year, on defense, Gibson collected 74-tackles, 22-TFLs, 2-sacks, a forced fumble, and a fumble recovery. Offensive numbers are harder to quantify for an offensive lineman. We can tell you the offense scored 378 points in 13 games and had one of the more balanced offensive attacks on the eastern end of the commonwealth.

Gibson and his teammates are looking for a great year. Hopefully they can return to the Regions and make a better showing this year than last.

Expect big things from Gibson this year on and off the football field. This is a kid who will do whatever he sets his mind to doing.

He works hard and meets with success. This trend to date will continue to be the case; a fact which also doesn’t require a “rocket scientist” to predict.