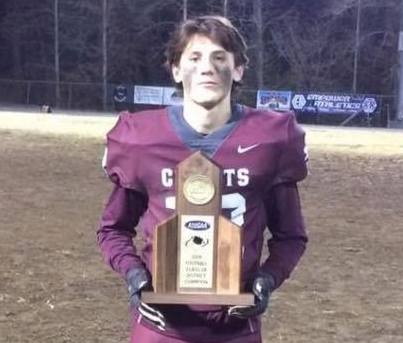 This Comet always seems to be making plays…

It is reported on a variety of ways. Some people call them “ballers.” Some people report these type players are “always around the ball.” Some people talk about their penchant for “making big plays.” Some people say a player, like the one we feature today has a “nose for the football.”

Regardless of how you describe it, football people will always recognize guys like this when seeing them. West Carter’s Gage Leadingham is one of those guys.

He’s listed on the roster as a WR/DB combo guy. We think of him as all “DB” honestly. His statistics from 2019 buttresses our thinking.

First of all, Leadingham is a player who is never without a season. He led his football team, in 2019, to a district championship, a 9-4 mark, and a spot opposite Beechwood in the Regional Championship game.

He played varsity basketball, like his brother before him (who was quite good we hear, but we don’t cover that sport), and he played varsity baseball too. Point is, the kid’s an athlete with skills which related to the gridiron, diamond, and hard-wood.

Gage, in 2019, led the defense in interceptions with 6. As further proof of his being all DB, he only had 34 tackles in 13 games so, like we said, he was more interested in defending the passing routes than getting involved with the run-stoppers.

Of course, that’s okay, you really don’t want the back-four making a bunch of tackles anyway. Runners should already be down by then.

Even more impressive than his 6-picks where the three picks he housed. He led the team (and district) with 146-interception return yards on the season with 3 being returned to pay dirt.

Gage Leadingham is a guy with a nose for the football. He makes plays. He’s just a baller!

Hopefully, with guys like him returning, West Carter will find having ballers around the football team translates into winning championships. That would be consistent with our experience.