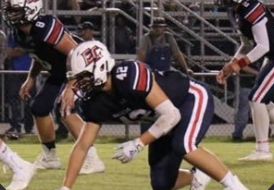 Class of 2022 defensive lineman phenom tore it up in 2019 and looks to do that to an even larger degree this coming fall.

East Carter had a really good year in 2019. Sure, it would have been grand to advance a little further in the playoffs. However, drawing an 8-regular season wins Russell squad is a bit of a tough first round pull anyway.

Still, East Carter did beat its heated rival, West Carter by 5 and lost to Fleming County on the road by a single point. There 7-3, regular season mark was a couple points from being 8-2.

Coach Tim Champlin has a good reason to look forward to what the future may hold. Among the reasons are the super young talent he has on his roster.

He has a couple Kisers on the squad, and if the 2023 kid (Braydon) should turn out anywhere nearly as well as Bryson (2022), then folks around the 7th-district are going to be eagerly anticipating that surname’s matriculation to Saturday nights. Players like the Kisers seem to play in high school forever when you are always having to play against them.

Braydon Kiser got in 4-games as a freshman and gained 14-or so yards on 6-carries. Can’t tell too much from those limited opportunities. As for big-brother; well, that is a whole other matter altogether.

Bryson Kiser had a fantastic year. He was among the leaders in tackles (60), led the team with 10-TFLs, and led the team with 6-sacks. Bryson also both forced and recovered a fumble. We very nearly selected him to our KPGFootball sophomore all-state team.

Bryson is 5-11 and weighs 210-pounds, or those are the dimensions listed for him on the East Carter roster. His frame looks long and we believe he will add significant heft and length if he hasn’t already. He is very explosive and uses his hands well to gain admission into offensive backfields as well as scraping up and down the line to make plays.

He made The Daily Independent’s All-Area football team in 2019 as an “honorable mention.” He will make the regular team this coming fall and likely several All-State teams too.

We will agree with East Carter on this one thing. If you want to know from whom your future defensive line talent is going to come, Bryson Kiser is a name one should certainly remember. You might just make a note of little brother, Braydon, too while you’re at it.