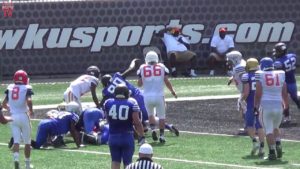 We can’t pep up a team at KPGFootball as well as the late Knute Rockne. What we can say is you’re about to experience something which will be one of the crowning achievements of a young man’s Kentucky high school football career. You will put on the Blue today and battle for the honor of Kentucky against your Tennessee counterparts.

You are earning your stripes. From this day forward you forever will be sewn into, and made an indelible part of, the fabric of the Brotherhood. No matter what else you do in Kentucky, you will be, at least partly, identified as a member of the Kentucky Future Stars.

We will leave you with this Kentucky and it comes principally from William Shakespeare’s speech on St. Crispin’s Day from his play, Henry V. In Act IV, it is said…

We few, we happy few, we band of brothers;
For he to-day that sheds his blood with me
Shall be my brother; be he ne’er so vile,
This day shall gentle his condition;
And gentlemen in [Kentucky] now a-bed
Shall think themselves accurs’d they were not here,
And hold their manhoods cheap whiles any speaks
That fought with us [today against Tennessee].

Men, win this game. Fight until you can not stand anymore. Give every ounce of effort and courage you possess then find some in reserve. Go in there and fight, fight, fight, men. What do you say, men!