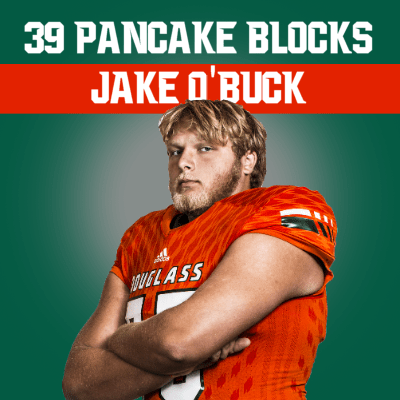 Trying to keep up with Big Jake O’Buck, the 6-5, 315 pound offensive lineman, who will play somewhere next season is difficult. Allow me to recap. Big Jake played on Lexington Christian Academy’s football team in 2016 as a freshman, or at least the person compiling the roster thought that. That LCA team opened the season with 12 straight wins before narrowly dropping the Regional Final contest in Lexington to 2016 Class 2A State Finalist, Danville High School 34-28. Now the people over at Frederick Douglass High School, which plays in Kentucky’s 6A classification believe Jack O’ Buck, a.k.a. Big Jake, played for Coach Brian Landis’ Broncos in 2017. As luck would have it, the Class 6A, District 7 Broncos finished last season 10-3. In the Broncos three losses, they got smoked by Class 2A Danville High School to open last season 36-0 in addition to being blown out twice by Scott County, the first time 55-21 and the second time (again for Big Jake another Regional Final loss) 45-13. Not only do the Broncos insist O’Buck played there last year, as you can see from the featured photograph attached to this article, he was credited with 39 pancake blocks entering the Scott County game, second on the team at the time.

Last year the Broncos rushed for 2,229 yards and passed for 2,007 in route to scoring 368 points for the year in what was one of the most balanced attacks anywhere in Kentucky. The Broncos even sported a 1,060 yard ground gainer in the backfield who accomplished the same in 181 carries and scored 15 rushing TDs in recently graduated Jefferson Harkless. Well, whether it is an aversion to Orange, or Big Jake just can’t bring himself to run out onto the field for the Broncos sans Harkless, Lexington Christian Academy, or whomever published its roster on MaxPreps, is of the belief Jack O’Buck will play his junior year back where it all started for him, at LCA. If that is the case, that is very good news for an Eagles‘ team coming off an 11-2 year, in Kentucky’s 2A Classification, which lost in the Regional Finals to the eventual State Champion (Danville again, the bain of O’Buck’s and a lot of other folks’ existence) and which only graduated 9 seniors from off last year’s roster, only 3 of which played on either side of the line of scrimmage.

I have just talked with a subscriber who tells me Big Jake was at the UK Football camp just yesterday hanging around and yucking it up with Coach Landis and the Frederick Douglass players. Oh well, however it turns out, as my head is starting to spin, it is for certain Jack O’Buck is a big-time player and athlete. O’Buck was at the UTMartin/Michigan camp in Martin, Tennessee and the work KPGFootball got to personally observe from the Martin offered prospect was, in deed, impressive. The 6-5, 315 pound line prospect reports a 5 flat 40 yard dash time, a 4.97 pro agility shuttle, a 22 inch vertical leap, a 325 pound bench press maximum lift, and a 465 pound back-squat. All of these numbers comported with what we personally observed of his performance during that camp which tested theforty, shuttle, a broad jump, in addition to individual position work and one on ones. One thing is for sure, pretty easy to see why UTMartin has already offered and why 247Sports.com has him listed among Kentucky’s top prospects in the Class of 2020. Whether an Eagle or Bronco, this is one Lexington prospect who appears certain for stardom at levels of football above either Class 2A or 6A and who will play Division I college football.