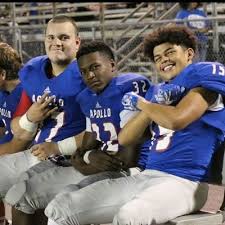 Coach Phillip Hawkins moved from Louisville Doss to Owensboro Apollo after 2017. He was the Head Coach at both programs, both programs finished the previous season with identical 8-4 records, both programs play in the 5A classification with Doss in district 4 and Apollo in district 1. I guess if you are searching hard to distinguish the two, Doss had a 5-0 district record and was 6-2 in its region while Apollo was 3-1 in its district and 3-2 in its region, so there is that.  That may not explain why Hawkins would move from the one to the other, perhaps he just preferred living in Owensboro to Louisville. Being a small town kid myself, I understand that can be a powerful motivation. Maybe he wanted to get to coach a running back the likes of Mariano McKenzie, although Dalion Young, who gained over 1,300 yards with 12 rushing TDs over his sophomore season, certainly ain’t nothing to sneeze at, as folks around Hopkinsville are fond of saying.

I befriended in college (UT Knoxville) an All-American linebacker named Keith DeLong. DeLong went on to the NFL, after college, winning a Super Bowl, while starting in the middle, for the San Francisco Giants. DeLong always maintained that athletes could jump and run. He believed the physical traits of someone’s athletic ability was demonstrated by his ability to do both of the above things. That is why KPGFootball reports verticals, broad jumps, and speed and agility times so often, provided we have access to them. Another friend of mine who coordinates a division I, college football defense, puts huge emphasis on vertical explosion as being necessarily present as an indication of athleticism.

Well, Marioano McKenzie is some kind of athlete. McKenzie measures 5-10 and weighs 175 pounds with a registered 40 speed of 4.6 seconds. For those wondering about his 40 speed, it checks out on two fronts. For starters, he has a measured vertical of 31 inches and, secondly, he has recorded a fully automated, 11.71 second 100 meter sprint time as a member of the Owensboro Apollo track team. While reddit.com indicates an 11.71, 100 meter is a 4.78, or so, 40 yard dash; remember that track times are fully automated and Mariano is 5-10 and somewhat a short-strider. Taken together with a 31 inch vertical, there isn’t a college recruiter around who is going to be too suspicious about whether McKenzie can cover 40 yards in 4.6 seconds.

There is the part of being a college prospect which requires you to be athletic and then there’s the part which requires you to actually take those skills and play the game of football and produce. McKenzie carried the ball 177 times a year ago, gaining exactly 1,000 yards on the ground. McKenzie also scored 8 rushing TDs, averaged 5.65 yards per attempt, and did all of this on a team which only tallied 1,703 yards for the entire season. What this tells me is that McKenzie found yards where other Eagle backs either couldn’t or, for all intents and purposes, didn’t. While sophomore, Dalion Young at Doss gained some 300 additional yards; Louisville Doss, as a team, ran for 2524 yards last season. We certainly aren’t discounting Dalion Young, after all, we selected him a Sophomore All-State RB just last year. Young wasn’t the only back finding running room at Doss which indicates Doss may have been better up front or played a softer schedule. Having seen both schedules, we discount the latter and go with the former.

Regardless of why Hawkins moved to head up the Apollo program, which, ultimately, can only be answered by him, he’s at Apollo now, and the Eagles seem right glad he’s there. To KPGFootball it appears one of the players who may very well benefit most richly from Hawkins’ arrival is Mariano McKenzie, whom we believe will carry it more than last year’s  16-17 carries a game. Next year, McKenzie will make 1,000 yards and 8 TDs seem rather paltry in comparison to what he will produce in 2018. That, at least, is how we see it.