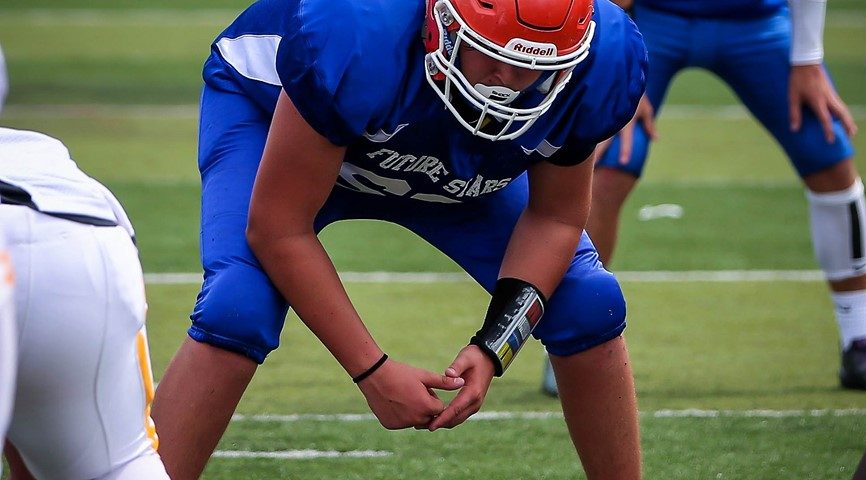 Frankly, and we will put this as judiciously as we are capable, there wasn’t a lot about Kentucky’s offensive performance in Saturday’s Kentucky-Tennessee Future Stars Classic, at least in the 8th grade game, which we didn’t find, well…offensive! Tennessee’s lone score was on the Kentucky punt team, so let’s not pretend the Tennessee Future Stars team set the world on fire offensively either. Both offenses looked like prize fighters “feeling each other out” in the early rounds of a bout. Tentative, to say the least.

Tennessee’s mammoth defensive lineman, E.J. Smith, raced untouched through the middle of the punt protection to block an attempt. His furious onslaught gave Tennessee possession near the Kentucky 13-yard line. Basically, for his efforts largely consisting of that one play, Smith won Tennessee’s Defensive MVP. He may have deserved the Offensive MVP too, providing really the only offense in a 7-0 final score.

That shouldn’t be taken to mean there wasn’t some exceedingly noteworthy performances for Kentucky on offense. One of the most standout performances, from our vantage point, was the play of offensive center, Braiden Myers.

Myers roomed during the week with the superstar offensive tackle from Breathitt County, Evan Miller. Maybe it was the water the two shared, or the camaraderie, but both players performed well during the game along Kentucky’s front.

Now, offensive center is the hardest slot to fill along any team’s line of scrimmage. First, he has to snap the ball and any misstep in that chore is a game-changing, momentum-shifting event in a football game. Second, he has to make the run and protection calls for his line-mates. Third, and not to be discounted, he has to block what the other team puts in the zero to one technique either directly over top of him or shaded to one or the other side, just in the gap.

The gap an offensive center is responsible for, being the most direct line to the QB and the football, draws a player the defense considers it’s best and most terrifying down-lineman. The player put there is the other team’s E.J. Smith, so to speak. In other words, pretty freaking terrifying!

Myers handled the snap like an all-pro, appeared to have the lanes and gaps blocked appropriately all afternoon, and limited most of E.J. Smith’s heroics to plays against the punt-protection. Myers, whom we watched with particular interest as we know how critical the offensive line play is to the eventual outcome, performed as well or better than any center we have seen play in a good while.

We would imagine the vast majority of fans at Fortera Stadium, Saturday, forgot Myers was out there. We don’t remember a time when a huge play in the backfield was occasioned by some furious charge through the center of Kentucky’s front.

Myers is 6-2, and we would guess his weight in the area of 210-pounds. He has long arms and legs and looks as though he might have additional growing to do. He certainly will “fill out” and add “good weight” as he strengthens in a high school strength program. He moves his feet well and plays with his hips sunk and over his backside and feet, lunging into bad position rarely, if ever, that we could tell.

We loved his feet and lateral movement and his aggressive punch. His snap was instantaneous, consistent, and belt-high, arriving to the QB on a pulse. By arriving on a pulse we mean to indicate the ball arrived in the QB’s hands in time for him to do something with it before the rush had any chance to stifle the play.

We would have to say the center position may have a new leader in the Class of 2023 coming out of his very impressive performance, up front, for Team Kentucky’s 8th grade Future Stars team. The battle for supremacy will continue to rage on into the Fall of 2019 as all three of the top centers, Myers, Ladd, and Castle, figure to play early, and on Friday nights, during the upcoming season.