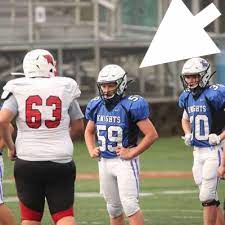 We can not ever stress sufficiently our duty and obligation to find the stars of tomorrow for readers TODAY. We pride ourselves in doing the research and rooting out the truffles.

We believe we have found quite a future difference maker for the Knights of Lexington Catholic here. His name is Cannon Mackley and he is an OL/DL guy who was a stalwart along the DL in middle school but who is being projected to play along the OL interior presently.

We really like offensive linemen who start out on the defensive line. Offensive line is a position which requires a passive aggression.

One of the first things which will get an offensive lineman beat, up front, is to lunge out at the DL in an attempt to take the action to them. Where offensive guys try that, they generally find a defensive lineman will use his length and quicks to get right past. So offensive linemen learn to play on their heels and sometimes struggle with strike, punch, and being physical at the point of attack.

Defensive linemen seem to employ aggression, strike, punch, and physicality much sooner in the journey along the road to “physical play” than their offensive counterparts. It seems offensive linemen, who begin their journey on the defensive side of the ball, develop a natural degree of nasty.

So, if an offensive lineman can learn to play back on his heels while simultaneously employing a defensive lineman’s naturally physical and aggressive style, many offensive line coaches will tell you it leads to superior down-hill performance, particularly as run-blockers. Naturally possessing a great deal of aggression and “hitting tendencies,” while learning to let the action come to him before meeting it at the cross-roads, formulates into an ideal front-five offensive guy coaches tell us. Cannon Mackley looks destined to be “that guy.”

Mackley is a rising sophomore (’24) for the Class 4A power program. He is 5-10 and weighs 190-pounds right now with plenty of room to fill out and finish his frame.

He’s really athletic, running the 40-yard dash in 5.07-seconds and possessing a 25-inch vertical which tells us the 40-time is legit. He bench presses 200-pounds and squats 370 putting him in the upper-echelon of his graduating class in the 4A classification in power, strength, and explosion.

Looking at his frame, we like that he has some length. If you will notice how long his arms are in the top picture and regard his long, slender neck while being relatively narrow at the shoulders; this all appears to physically indicate his having growing yet to do.

We don’t know exactly where he will finish out, but have every reason to believe he will top-out over 6-feet tall. How much over 6-feet he grows will have a lot to do with where he will be projected to play collegiately.

Mackley is a hard worker who distributes that effort across the playing field, weight room, and classroom. He has played football since the 3rd-grade and has been described as both “coachable” and a player with a very high “football IQ.”

We see this guy as an Ivy-league, Ivy-Index, next-level player who could grow into a Division I type depending on how his frame finishes. Regardless, Mackley has all the tools to be a dynamite, Friday-night, 4A superstar for one of the classification’s premier programs. As for the Friday-night portion of our predictions, the future looks to be “right now.”