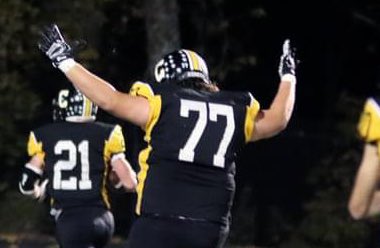 Wyatt signed with the University of the Cumberlands to play collegiately. He backed out of playing on Saturdays to return to the glare of the “Friday Night Lights.”

No team in Kentucky gets down hill in the run game from scrimmage like Johnson Central High School. They aren’t called the Pancake Platoon for nothing.

In 2019, the Pancake Platoon led the state in helping its backfield accumulate 4,526 rushing yards in 523-carries with 68-rushing TDs on the season. That team averaged 301.7 yards and 4.5 rushing TDs every, single game.

In 2020, losing its leading rusher in ’19, the Pancake Platoon, in only 409 rushes from scrimmage (pandemic year), still amassed 3,884-yards. The team averaged 353.1 yards a contest. Johnson Central scored 56-rushing TDs and 5.1 rushing TDs every, single game.

The Johnson Central running attack (which everyone in the stadium knows is coming) is monotonous. It has been likened to “Chinese water torture” by those charged with stemming the coming high tide.

Lucas Wyatt is a vital cog in the chain that is the Eagle offensive front. His is both an imposing and experienced link which, taken with its other parts, composes the most impressive unit in Kentucky high school offensive football.

Wyatt runs the 40-yard dash in 5.8-seconds and short shuttles in 4.9. He has a bench press approaching 300-pounds and a back squat around 500-pounds. Wyatt’s vertical leap is 24-inches.

Perhaps his scholastic scores are among the most impressive among his statistics. Wyatt’s 3.5 GPA and registered 23 on the ACT puts him in discussions, college-wise, about which other athletes can merely dream.

Where do we see Wyatt in the Fall of ’22? He could go back to the University of the Cumberlands who (we would think) have left that door open for him to come back through should he wish. The Cumberlands is among the very elite college football programs at its level of competition in Kentucky.

We could see him matriculating toward an elite academic school. His grades and scores have put him in the right academic zip code to get to explore those type opportunities.

Wyatt isn’t too worried about any of that. Right now, all that he’s interested in is something he shares with the other members of the Pancake Platoon.

Wyatt’s ready to leave bodies lying around the playing field like bodies were once left strewn around Gettysburg. Wyatt and his mates are ready to blaze their path toward Kroger Field and a shot at another title in ’21 to go with the one the team won in ’19.