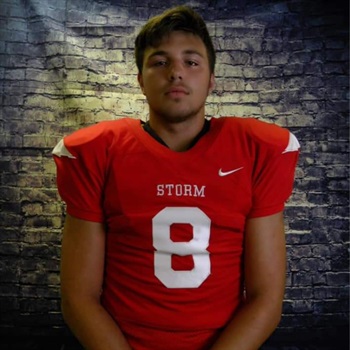 Kentucky High School football said good-bye to some really fine quarterbacks. If you believe Beau Allen was the only good signal-caller in the high-school graduating class of 2020, you don’t know much about the sport commonwealth-wide.

There was Max-Preps, small-school All-American Drew Hartz. There was Marshall signee, Eli Gammons. There was Centre College signee, Reed Lanter. There was Logan County’s most celebrated and (we think) winningest QB in its program history in Tyler Ezell.

The 2021-class also boasts some talent at the position. We have already featured Caleb Jacob from Covington Catholic. We have before told you about Kaiya Sheron from Somerset (headed for UK when his HS eligibility is exhausted). We have just recently reacquainted you with “The Rifleman,” Aaron Hash; headed off after this next season to play D-1 college baseball.

There is another quarterback from the western-end of Kentucky you need to recognize, if you really want to convince anyone you have the commonwealth well scouted. That guy can be found virtually the last place you would expect. He is under center for Hopkins County Central High School.

His name is Adrian Stringer. He is 6-3, 230-pounds and DEFINITELY one of his graduating class’s top-five QBs Kentucky-wide. He’s chosen to stick it out a place a lot of people would have left.

Hop-Central’s mascot is “The Storm.” Has it ever been storming around those parts of late?

Our former writer took a lot of heat once for calling the team a “not so terrific football program.” Well, in 2019 they were horrific.

The team was 0-10 and got blown out every week but one. In its first game, it went to Webster County and came out on the losing end of a 20-14 margin. The rest of the season didn’t go nearly as well.

For the year, “The Storm” scored 177-points while surrendering 513 in route to a winless campaign which resulted in the program’s decision to move in a different direction. The program, who’s last win was a 19-6 margin over Todd County Central in 2018, hired the middle school coach, Chris Manning, from South Hopkins.

Manning is a winner. Manning will get the South Hopkins middle schoolers who have been retooling the North-Hopkins’ roster to enrich his. Manning was far from “just a middle school football coach.”

Manning won 250-games at the middle school level, led South to the final four of the KYMSFA his last two years at the helm, and was an assistant on the Murray High staff which was state runner-up in 1994. He went on to serve in a similar capacity (assistant coach) at North-Hopkins before taking the job at South Hopkins Middle School.

The team he inherits has lost 16-games in a row. The team has lost one of western-KY’s best receivers to graduation (Blasin Moore, 74-receptions, 1,115-yards receiving, 9-TD receptions). The team has one-Heck of a QB returning, with not much else around him.

With everyone in the house knowing exactly who was going to get the down field target, Stringer still completed 52% of his passes in 2019 (192 for 368). He set four new school marks along the way.

We would be very surprised if Central didn’t have a substantially better season in 2020 even with the departure of Blasin Moore. There are several reasons for this.

For one, North-Hopkins has lost A LITERAL TON of talent from off its banner season in program history which saw them advance all the way to “four-teams still standing.” Hopkinsville also lost a lot of talent on both sides of the football and the situation at QB is untested, unproven, and uncertain.

Logan County lost a great deal to graduation, including its most celebrated and successful field-general in program history in departed QB Tyler Ezell. Logan could be quite tough still, in 2020, but it rests on to whom they turn to replace Ezell.

So, the first district would be ripe for a Calloway County or a Central to make a move. Another reason for a rosy prediction are the players from South who followed its coach to Central instead of going to North-Hopkins, like they were prone to do in the past.

Normally, ninth graders aren’t too much help right off the bat. However, that being said, Logan Rodgers and Calil McNary are anything but “normal” rising 9th-graders.

Rodgers, a Team Kentucky Future Star, left MS South’s all-time leading rusher and Calil McNary doesn’t even look like a MS kid and hasn’t since 7th grade. Those two enrolling at Central over North will pay immediate dividends we believe and will form a cornerstone for unparalleled success down the line.

Until they are ready, Central has its “Ace.” Adrian Stringer is a kid whose numbers on a roster with more players who even look like him on it would be hard to fathom. He’s a splendid athlete, a splendid football player, would make a fine LBer; and, for now at least, poised to be the “King of the (QB) Mountain” on Kentucky’s western-end heading into 2020.