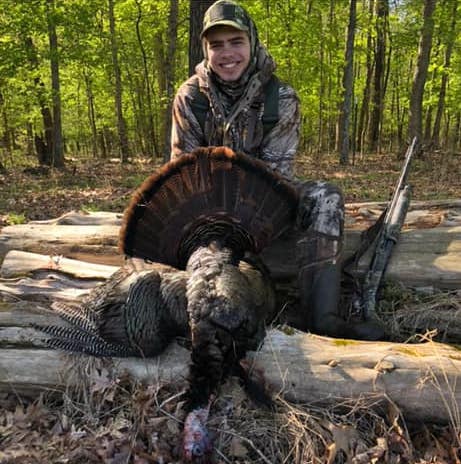 We were talking with the head ball coach at Bourbon County just the other day. David Jones is a correspondent for the magazine and has been since his days running the football program at Phelps.

We talk with these correspondents all the time. That is what makes our information both commonwealth-wide and cutting edge.

Go back and look at the stars emerging on the KHSAA football scene. You will discover we predicted it and wrote about it before anyone else.

These aren’t isolated incidences. This literally happens all the time. That is why we are the most read and subscribed to source for football information, Kentucky-wide, in the commonwealth concerning middle and high school football. It is an easy formula.

We told you all this to tell you to look for the emergence, both this year and next, of one Bo Stinson. Bo, as one would grasp from the featured photograph posted with this article, is an avid and accomplished turkey-hunter. According to Coach Jones, he ain’t no turkey playing either TE or DE for his Class 4A Colonels.

Bo is 6-2 and weighs 185-pounds right now. His feet and hands are huge and, if we are being honest, he hasn’t grown into either yet.

Bo has a 73-inch wing-span and has the frame to gain considerable length to add to the additional height which looks to be undoubtedly forthcoming for him. He has a youthful, boyish physique and charm which isn’t destined to last much longer.

He is what we call in football circles “a late bloomer.” If history has taught us anything, it has shown us that the late bloomers are often the ones who bloom both longest and brightest.

Bo registered 20 or so tackles last season, with many of those tackles registered behind the line of scrimmage. He was most deployed on the edge at end, on both sides of the football. He registered 3-QB sacks. He had one carry, on a jet from the slot, which he took 35-yards from scrimmage. He made the most of that opportunity!

Bo projects to play a multitude of positions. Most recruiters see him as a DE/TE guy depending on how he develops particularly speed-wise. He is also a guy who can bulk up and be an extremely athletic interior defender and interior to edge offensive lineman.

The all-state, freshman, academician has the IQ and instinct to weaponize the football knowledge given him; enabling his being utilized in a multitude of slots either offensively or defensively. He is the son of two career educators.

His mom has a doctorate and works in education at the administrative level. Bo’s father, a former Kentucky Wildcat and defensive captain from the early to mid-90s, provides for him the guidance and DNA football enthusiasts crave.

We believe, at KPGFootball, this is one of those seminal “remember when” moments. As this young man continues to blossom and develop, we predict he will be a football playing force with whom to reckon going forward.