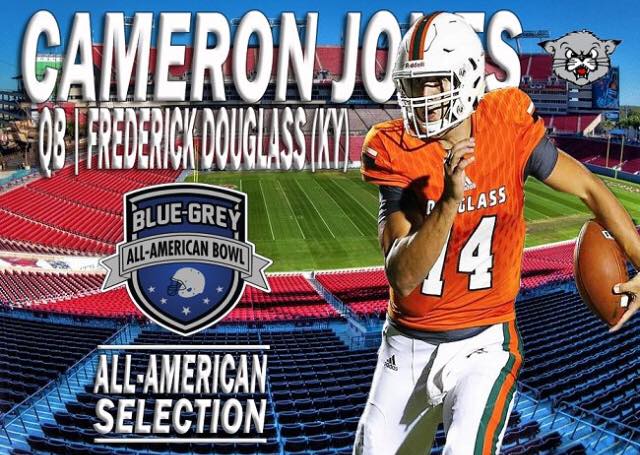 Had a subscriber ask KPGFootball an interesting and legitimate question which came, not from a bad place, but from a place of wanting to understand the way in which All-American teams are selected and how one high school player is selected over another. The question emerged in response to my posting, on Facebook, an online promotional done by the Blue-Grey, High School All-American Bowl touting the fact University of Cincinnati commitment, Cameron Jones, from Frederick Douglass High School is playing in its bowl game upcoming this January, 2018 from Tampa’s Raymond James Stadium. What was asked was whether Cameron was selected for the Blue-Grey game on the strength of his being offered by Cincinnati. It reminded this author of the time I ran for Mayor in a town in which I was living. I was asked, and rightfully, just how I deemed myself qualified to be the Mayor of the town (which I assuredly wasn’t). I responded that there wasn’t but one qualification for Mayer of which I was aware and that was getting more votes than the other candidate.

As for All-American games, there are a ton of them. Some of them are deemed more prestigious than others. The Blue-Grey game is played in 3 fantastic venues and is aired on ESPN3 touting the participation of some mighty sought after players on its rosters. One of the games is played in Dallas, Texas at AT&T Stadium in Dallas and home to the Dallas Cowboys, one is in Houston at NRG stadium and home to the Houston Texans, and the one in which Cameron Jones will play will be played at The RayJay or the Raymond James Stadium in Tampa, Florida, home to the Tampa Bay Buccaneers.  We are very proud of the Kentuckians selected and have decided to discuss Cameron Jones and just why it is that he was most likely selected an All-American in spite of an offer list which sports Middle Tennessee and Cincinnati as his top offers.

Cameron has an NFL frame at a critical position, QB. At 6-8 and 242 pounds, Jones is a drop-back, pro-style prospect who led his team, this year, to an 11-1 record; losing to Class 6A semi-finalist Scott County in round two of the KHSAA high school football playoffs, 28-27. A fair argument can be made it could just as easily been Frederick Douglass taking the field tonight against Madison Central with a trip to Kroger Field on the line as it is Scott County. Incidentally, no one asked but KPGFootball believes Scott County is advancing tonight to play the winner of Male-Trinity, and we would be of the same opinion had it been Frederick Douglass, and not Scott County, who won November 9.  On the year, Jones completed 145 of his 199 passing attempts, for a completion percentage of .7286432. He threw for 2,714 yards passing (226 yards a game on average) and 31 TDs versus only 5 interceptions. By our guesstimation, Jones has to be among the leaders in Kentucky, or even the nation, in both QB rating and completion percentage.

Jones is a 3-star rated player by the majority of the rating services and is the 12th highest regarded Kentuckian in the Class of 2019 by those same services. He has performed in Combines well, registering a 5 flat, 40 yard dash, which is adequate for a pro-style QB. Jones is athletic and has good vertical explosion as his 32 inch, vertical leap, would denote. Incidentally, vertical explosion is more and more measured and desired by college programs looking for prospects. Jones’ power numbers, especially for a QB, are really good. Jones bench presses 325 pounds, back squats 450 pounds (vertical explosion indicator), and deadlifts 550 pounds (which some recruiters consider an explosive movement too, though not all). All of the above numbers, being Combine registered numbers, indicate the following about Cameron:

Cameron Jones reports his commitment to the Bearcats at the University of Cincinnati as being solid. If I am a Bearcat fan, I would really hope that to be true. This is a prospect who, with a good showing down in Tampa, could very well get late-looks from FBS, power-5, teams looking for a Josh Allen to fall in its lap. Those of you who follow football may remember one of the top QBs taken, and seventh overall selection in the first-round this past year in the NFL draft, was University of Wyoming QB, Josh Allen, 6-5, 230 pounds. Josh was a 2-Star QB, coming out of high school, and had one Division 1 offer from FBS, non-power 5, Wyoming. So the question we have to wonder aloud is this…should Cameron Jones end up Josh Allen(ing) in college and ending up a first rounder, will we be asking, at that time, whether the Blue-Grey’s selecting him a high-school All-American was either a wise or foolhardy selection? Probably not. The Blue-Grey may look like genius’ to us then. To be fair, Cameron’s chances of not being the next Josh Allen well exceed his chance of turning into him, as statistical data tells us Josh Allen’s don’t grow on trees. However, we said all of that to say this…being either a high school or even middle school All-American in football has criteria no more fool-proof than voting for Mayor. A selection committee from an All-American Bowl or media service has to select you to its list, team, or game. If that happens, you’re a High School All-American.

As for Cameron Jones, he was selected to the Blue-Grey All American game so, therefore, he is a high school All-American. At KPGFootball, we feel Cameron Jones was an entirely defendable selection and would likely have gained support form us had KPGFootball been on the selection committee. By the way, we weren’t.