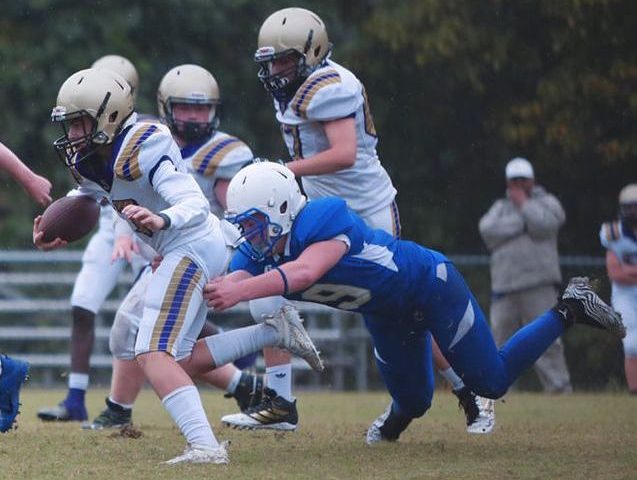 Breathitt County Middle School shows its a legitimate title contender against Johnson County on ‘The Riverbank’ in Jackson, Kentucky

Allow me to hit you with some knowledge. Last night, the Breathitt County Middle School, in an incredible performance, dominated Johnson County in all phases of the football game in route to a 20-8 victory on The Riverbank. Johnson County’s lone score happened on a long touchdown pass completed with a rush bearing down on the Eagle’s QB in furious fashion.

This has an incredible impact on the future fortunes of the Breathitt High School football program. Now, that is easy to say, as all programs believe what the young guys do “down on the farm” impacts the big-club’s performance in future years. However, there is hard data supporting this statement.

How are the E-Town Panthers doing in 2020 so far? Well, they are currently undefeated and ranked number one in this week’s Associated Press top-10. Lots of people believe they look poised to grab the 3A title this year.

Meece Middle School, who our Breathitt Bobcats beat less than a week ago, 14-8, and which is the one-seed in this year’s division 3 regional, KYMSFA playoff bracket, won titles in 2009, 2011, and 2018. So the Bobcats have beaten two middle school teams who regularly compete for KYMSFA-championships in successive games.

So what does this mean? Well, it means the Breathitt Bobcats have the fire-power and star-power to win it all this year. It also means projected success going forward as those boys enter HS and the Bobcats’ varsity football program next year is arguable. Matter of fact it might well be termed, “probable.”

No matter what any nay-sayer may want to tell you, it absolutely is a reliable predictor of future success. Watching the game last night standing next to a salivating Kyle Moore, AD and HFC of the Breathitt HS program, it appeared to this reporter Coach Moore is as aware of this as I am.

Now, as for last night’s game, it was a dominating, 3-phase performance. First of all, one has to be amazed at the ability of RB/LB Kory Combs. Combs just flat runs over would-be tacklers. How he plays and what he does to opposing defenders is punishing. It is humiliating. It is emasculating.

He is led into holes by two guys who are trucking a few people these days too. Both Jason Tolson and Jayden (Gibby) Gibson are perfect compliments to Combs’ and the OL’s all-out, down-hill ground assault on opposing defensive front two levels.

Combs absolutely trucked one would-be tackler last night and Kyle Moore looked at me and said, “I am a full grown man and I would hate to try to tackle that kid.” Ditto!

On the night, Combs would account for two of the three touchdowns scored. The third touchdown was credited to Braden Johnson, on a pass from Aaron David Johnson. Brayden Johnson is just a fine, fine football player. Aaron David may prove to be special.

In addition to his passing, which is actually a small part of playing the position, I was equally to more impressed with the deft, nifty, and timely way he managed the offense and the ball game while playing QB. Aaron David Johnson (7th grader), together with his incredible poise in what amounted to the biggest game of the year (so far), put together a youth-defying game performance in leading his team to the victory circle.

Secondly, the offensive line is one of the better units at that level of play I have ever seen. Now when I say that remember the following things.

First, I am on the editorial board of the only KY-wide coverage of middle school football in Kentucky history (Kentucky Prep Gridiron). Secondly, I coached offensive line at the middle school level, before moving up, and took a team myself to the KYMSFA semis in 2016 and lost to the TK Stone (team above discussed), 38-36.

Point being, I am hardly some casual fan shooting off my mouth about a topic about which I am speculating. I know exactly what I am talking about, am considered the foremost expert on this particular topic in Kentucky, and, when I hold forth on a topic like this, other people, around the commonwealth, who know “what’s what” shut their mouths and listen. Some take notes.

This offensive line is special. That is the end of dictation.

Last night, Ty Clemons (LT), Sawyer Hall (LG), Carson Miller (OC), Waylon Abner (RG), and Chris Neace (RT) took over the game. They controlled the clock (they ground out a drive which ate up the entire 3rd Q (but for a few seconds), they played relatively penalty free, and they just wore down the Johnson County front.

The defense was perfectly stifling. Johnson County struggled getting first downs on most all of its drives and the lone touchdown was a long completion to a streaking 9-route down the far sideline under an incredibly harsh pass rush with the QB getting the ball away a fraction of a second before being completely bombarded. If Johnson County’s QB holds the ball another millisecond, he’s sacked and its Breathitt football.

It was 4th and 11 when the pass was completed. That would be Johnson County’s only threatened score on the night.

Kory Combs flew around on defense slaying ball carriers and intended receivers like a man possessed. He continually flies around the field at a different speed than most of the other players.

There were some other outstanding defensive performances on the night. Vincent Bowling, OLB, was hunting the football all night and, according to Coach “Shorty” Combs, Leyland Hurt at SS played his most physical game of the year…” and at a critical time. Coach Combs also acclaimed Brayden Barnett’s successful break-up of another long pass, late in the game, with Johnson County trying to strike “lightening in a bottle” a second time.

So up to exactly what does all of this add? In the short run, BMS winning a state football championship from the KYMSFA is looking like a distinct possibility. In the long run? Well, one can kind of let his or her imagination run wild, wouldn’t you agree?

Reporting specially for Kentucky Prep Gridiron and standing in for the legendary HB Lyon, this is Fletcher Long and we’re JUST CALLING IT LIKE WE SEE IT!