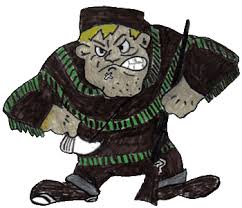 As we have before stated, we are working on both a Freshman and Sophomore Kentucky Prep Gridiron All-State teams. Why? Well, one reason is there isn’t any All-Star team which generally recognizes underclassmen. The All-District, All-Region, and All State Teams from across the Commonwealth of Kentucky will be heavily peppered with Seniors and a smattering of Juniors. That isn’t really because the upperclassmen are the better players and, therefore, more worthy of the recognition. That may have been true once but now the younger guys are coming in prepared to contribute and benching the older players across Kentucky. There are plenty of examples but here are a few: Louisville Ballard’s defense, as well as Owensboro’s, were both led in tackles by Freshmen this past season. One of the best running backs in Kentucky is a Sophomore at South Oldham and South Oldham’s leading receiver and Corner are both Sophomores too. So South Oldham must be struggling, right? Wrong, 11-1 and playing for its Regional Title in Class 5A. Two of Hopkinsville’s best defenders are Sophomores and the Tigers started a Freshman at defensive back who had over 30 tackles and three interceptions in spite of dying tragically after having only played 5 games. Hopkinsville has been led to the Regional finals in Class 4A, Region 1, by a Sophomore QB who has thrown for nearly 2,000 yards this season with 20 passing TDs and only 9 picks and the QB has been protected up the middle by a center flanked by a Freshman to his left and a Sophomore to his right. So who’s going to recognize these players for their extraordinary ability in spite of their being underclassmen? We are!

While we are talking about big time Freshmen who have really contributed to his team, what about Braden Ferguson at Lexington Bryan Station High School? Braden is a 5’11” 204 pounder who plays with really low pad level and fires off the line of scrimmage, snapping the ball while stepping out into his block simultaneously. Ferguson locks on the nose or inside technique guy and keeps running his feet until the whistle blows or he pancakes him. He has a good quick and violent hand punch and keeps his elbows nice and tight throughout the block with his hands tucked inside the shoulder pads on the breast plate and away from the area where holds are commonly flagged. He is adept at snapping both under center and in the shotgun and his shotgun snap arrives on the money and on pulse, giving the QB an opportunity and, more importantly, the time to scan downfield without having to work too hard to handle the snap.

Of course Bryan Station would know a Center when they see one, wouldn’t they? Only one of the finest Centers in the history of football played there. As you may recall, and as I am sure the coaches have made young Ferguson aware, the great Dermontti Dawson, who prepped at Bryan Station before going on to star at Kentucky, and then the Pittsburgh Steelers was a Defender when he was in High School. Now Dawson was an Offensive Tackle at Bryan Station and an Offensive Guard at UK before being moved to the position which would gain him enshrinement in the Hall of Fame as a Steeler upon the departure of another Hall of Fame Center, Mike Webster. While reviewing film of Ferguson, and, in fairness, probably in part because one plays and the other played for the Defenders, I thought of old Dirt (Dawson’s NFL nickname) as Ferguson ground player after player into the ground finishing his blocks. Can’t really say Ferguson grinds the opposition into the dirt, at least not at home, because the Defenders play on artificial turf, but, you get the point.

All situations are fluid, but, if I were to make a wager when the selection committee convenes to select our All-State teams, I would put money on Braden Ferguson, Class of 2021, having his name bantered about the room for the Freshman team. I am pretty close to certain on that.

This is Fletcher Long reporting for Kentucky Prep Gridiron, reminding you to PLAY THROUGH THE WHISTLE!