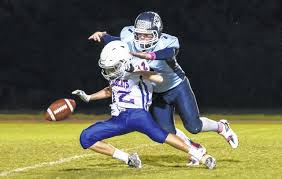 Zach Yates is a big LB at 180 pounds, but there are bigger; He’s fast, but there’s probably faster.  Zach Yates is strong, but there are probably stronger.  What there may not be is a football player in the 2021 class who is any more of a baller.  Zach played QB on offense this year for his Logan County Cougar team which went 10-3 and was the Regional Runner-up, but no one really is fooled about whether he is a QB.  Oftentimes in football teams take non-QB’s who are just great athletes and put them at the position to put the ball in their hands…like HMS did with EJ Austin for instance.  Everyone agrees Zach Yates is a LB.

Zach was on the West KY All-State Team for the East-West KY All-State Classic and he split reps with William Long at MLB.  Now William is a 250 pounder and so, Zach Yates, at 180 looked small in comparison.  When William would come out and Zach go in East KY would try the middle, running at Zach, because hey, the little guy is in the middle.  Well, Yates was killing the runner with hits in the middle so hard it left the ball carrier flopping around on the ground like a catfish in the bottom of a fishing boat.  After running at Zach a handful of times, East KY decided it better abandon running up the middle altogether.  I thought, as I was on the West KY Coaching Staff’s Offensive side of the ball that if we had put Yates and Long on the field together, the East might have forfeited.

Zach always takes the proper angle to the ball carrier and explodes into the backfield with reckless abandon like his rear’s on fire.  He sinks, coils and explodes low to high through the ball carrier very well and scrapes down the line of scrimmage well to put himself in position to make plays.  He is a sure tackler and rarely runs by plays as he has a very high football IQ.

Kentucky Prep Football predicts Zach will be on the field for the Kentucky Future Stars should he wish and will likely start for Logan County High School from day one.  They just don’t get ballers like this everyday in Logan County.  Better days ahead for LCHS as they have a lot of well-coached talent on the way.