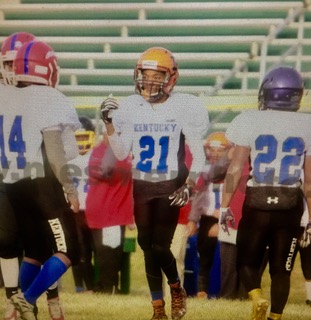 If anyone in the Commonwealth of Kentucky this year intercepted more balls than HMS’ Reece Jesse (9 picks, 3 returned for TD’s) then I would like to know whom.  Reece Jesse also led HMS in receptions for TD with 8.  Reece has good height (6’0″), large and soft hands (see picks and TD numbers), and tremendous length (6’5″ wingspan).  He’s dunking a basketball which says something about his hip explosiveness and speed as verticality is thought to translate into running speed.  He’s the third HMS Tiger to be featured, but, then again, HMS was 12-1, losing in the State Semis.  HMS has another WR/OLB named Lane Rushing who, had he played more than 4 games this year, might be mentioned among the very best 8th graders in Kentucky, but…I digress.

Kentucky Prep Gridiron, together with many Coaches across the state see Reece as a Safety.  That is certainly where he has the best chance for freshman, Varsity playing time.  Reece needs to develop more upper body strength to free himself from line of scrimmage jams and no one really knows what his running speed is other than he always seems able to separate from back fours.

My favorite story about Reece is about his incredible ball skills.  What I mean by ball skills is it really isn’t an accident he picked off 9 passes this past season.  You see, Reece really reads QBs well and if the QB lacks eye discipline…he’ll get you.  In practice one day, I was in the D-backfield and Reece was playing safety against our scout team when the QB telegraphed a deep post and I heard Reece say under his breath…uh oh, that’s mine.  He easily strode over to the ball’s descent and picked it as easily as plucking a plum from a tree.

When the ball is in the air…Reece thinks it’s his…whether at Safety or WR.  That’s why it would be crazy for Reece Jesse, again, should he try out, to not make the Kentucky Future Stars team and be in Clarksville, Tennessee this Summer.

Kentucky Prep Gridiron predicts Reece Jesse will suit up in Kentucky’s defensive back four and be in the rotation at WR and will see early playing time first at Safety but, eventually, adding WR responsibilities as his strength increases.