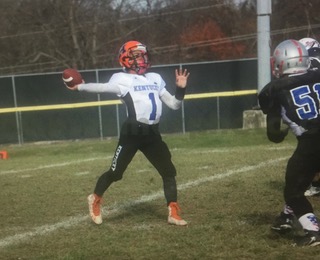 Among the top QB’s in the Commonwealth of Kentucky last year, by far, the one with the least impressive stature was HMS’ All-State QB, EJ Austin.  Don’t confuse stature with stats, however.

EJ stands a diminutive 5’7″ and weighs 145 pounds with a muscular, stocky build which serves him well at corner too.  Trying to catch EJ, well…you’d sooner coral a greased pig.  He is slippery, elusive, whatever you want to call it.  EJ wasn’t even supposed to play QB for HMS but the opening first teamer, Isiah George Forrest, who has many of the same characteristics as EJ (HMS was a spread, pistol, broken eye team which ran a lot of zone and moved the pocket).  If you have some time, check out the HMS-TK Stone Semifinal game, like thousands of others have done, and you will see EJ throw over the middle from a 5 step drop and effectively scramble left and right while still keeping his eyes downfield spying targets.  In fact, EJ Austin seemed to match TK Stone’s QB, Clay Games, throw for throw.

I don’t know if there is tape of this game but to get a full appreciation of EJ, one has to watch the fits he gave the East KY All-State Defense, which had at LB the fabulous twins from CAL, Brandt and Braeden Babin (They played for East KY in the game and then, also, for Team KY FBU), as they chased him around the field all day long containing him as ineffectively as one might tackle a shadow.   Not that Barret Traditional Middle School’s Jaylin Bross didn’t deserve to be MVP but lets just say there wouldn’t have been any argument from me had EJ been selected.

Kentucky Prep Gridiron predicts EJ Austin may well start as a freshman at HHS next year but not at QB.  EJ projects at the next level at either slot or corner and with an older brother over 6′ tall he should be more than tall enough to be a one-day Saturday player.  EJ will make the Kentucky Future Stars Team should he try out.  He’s too athletic to keep off a roster.

Epilogue: EJ did make the Future Stars Roster and started the first 7 games of his High School career for HHS at free safety. He was in the middle of what was the finest freshman year at DB this reporter has ever before witnessed when he was tragically taken from us in an accidental shooting which left him dead.