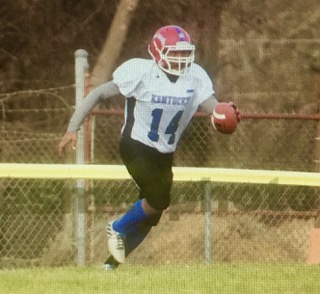 L’Ray Coleman from CCMS is a Slot/TE type who runs like a SE (4.89 hand timed 40 at the KYMSFA East-West Combine) and plays with the mind-set and disposition of a LB, not to mention the build.  To say this is a big, fast, athletic kid is somewhat of an understatement.  His numbers at the All-State Combine were off the charts from shuttle to forty to vert and broad jump. No Coach there could believe it.  During the game, Coach Marlon Hoskins (HC, Taylor County Middle School, OC West KY All-State Team) screamed out on the sidelines, I need a slot right now who will go in there and fold that LB!  I, without even thinking, blurted out, L’Ray, Coach wants you! It isn’t like he can’t catch the ball either, he has excellent hands, speed no one expects, the courage to come across the middle, he cracks back on unsuspecting LB’s in ways that really isn’t even fair.  Kentucky Prep Gridiron sees him being an early contributor at CCHS probably at TE or a big Slot depending on how CCHS aligns and has no problem stating for the record that L’Ray Coleman is one of the best players in Kentucky in the 2021 class even though he is a relative unknown other than his being selected for the East-West KY Game.

There’s one story about L’Ray you just have to hear.  CCMS and HMS were meeting at the end of the year at the Stadium of Champions in Hopkinsville, KY.  CCMS had lost once and Hopkinsville was 10-0 and both of them were among the best Middle School teams in Kentucky.  Now, HMS has a player (William Long) that everybody knows and all week leading up to the game, according to L’Ray’s HC, it was William Long this…William Long that…  L’Ray said to his Coach, Darrel Keith, I don’t want to hear another thing about William Long!  Forget him man!  I am the Heat!  I am that Guy!  I am that Guy! Let me tell you, this is exactly how a stud football player should think.  L’Ray, you absolutely are that guy!  You are the Heat!  If it makes you feel any better, as a member of the HMS Coaching staff, we talked a lot about you too.