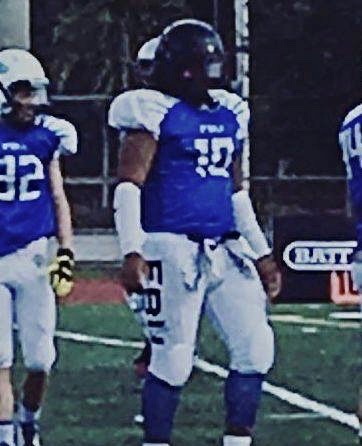 Justice Thompson, a 6’1″ 235 pound DE and member of the Class of 2021, may be just that; he may be the class of 2021, at least at his position.  If you want to hear something scary…he plays running back on offense.

You hear the term Jumbo Athlete and let me assure you that 8th graders Justice’s size aren’t exactly a dime a dozen…8th graders that can run like Justice even fewer still.  This kid is a Jumbo Athlete.  He is plenty big to stand up OT and shed them to get to the ball while at the same time fast enough to dip his shoulder and just torch them around the end.  Even scarier is that he is fast enough to cross a tackle’s face and still close outside to run a ball carrier into the boundary or turn him into the pursuit, even if he doesn’t make the one-on-one play in space, which he is prone to do.

Kentucky Prep Gridiron confidently proclaims Justice Thompson the class of the Commonwealth’s DE/OLB (depending on scheme) players.  If Justice Thompson is at Ballard on April 9, 2017, and with him slated to attend Ballard this Fall one would think he is a lock to be, Kentucky Prep Gridiron can not fathom a scenario where Justice isn’t on the Kentucky Future Stars team.  Here’s an easy prediction for you…Justice Thompson is a Saturday player and probably logs significant PT for Ballard next year as a freshman if he doesn’t start.