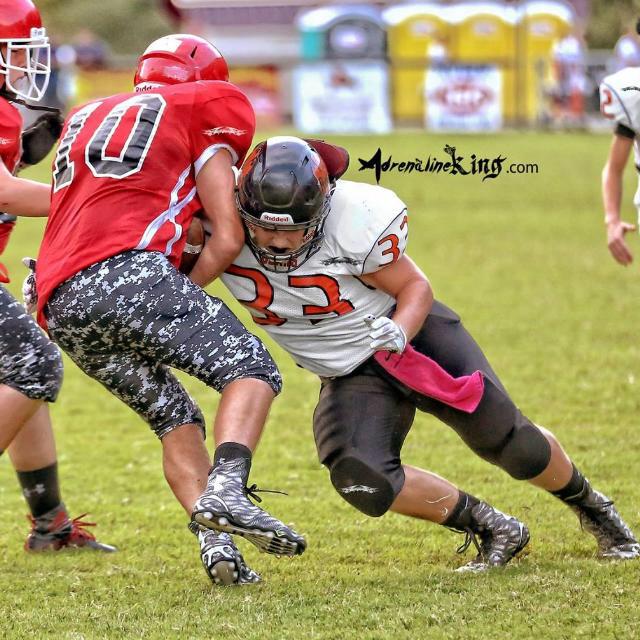 There are just kids who look the part.  I don’t know if it is the scowl on Preston Spurlock’s face, his Mohawk, or his penchant for contact but if you were to draw a Defensive Football Player you might even draw his picture.  Preston has played nothing but MLB, and at 5’10” and 225 pounds he is built for it, and he has the hips and explosion for it.  He plays with really good pad level, sinks his hips well, and plays with his head up, shoulders back and chest proud.  There are questions about his speed, spacial quickness and coverage skills.  He is tailor made to patrol from tackle to tackle.  Can Preston fill, pursue and tackle the cut-back in space?  Can he make a drop and cover the TE or Slot which either slants or curls into the middle zone?  Can he cover the back on the middle screen out of the backfield?  Can Preston close out on outside running plays consistently?  Well, as you can see, Preston is entering a phase of football which requires more from a MLB than shutting down the insider running game.  Those are legitimate questions, but I am not saying he can’t do any of those things above listed, but Coaches familiar with his game tend to wonder.

That aside, no one questions his toughness or metal and Kentucky Prep Gridiron believes it may be time to put his hand in the dirt and either play him as a 3-4 End or slid him inside in the 4-3 to tackle where he would be both fast and quick for either of those positions.  The kid is strong, explosive, powerful, heady and an absolute joy to be around.  Most importantly, he hits like a ton of bricks.  You know there is something about that coal country that produces tough and hard and Preston is all of that and a bag of chips.

Kentucky Prep Gridiron predicts Preston Spurlock will head to Lexington, Kentucky April 16, 2017 and will make the KY Future Stars Team and will join his Kentucky brethren in their annual border battle with Tennessee in Clarksville.  Preston will challenge for early playing time on the High School Varsity team at Leslie County next fall and he is a future Saturday player.