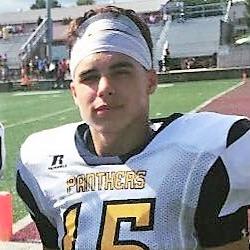 Knox County’s Ethan Mills is one of those “scatter-backs” you not only can’t really see, but you probably couldn’t catch him, even if you could see him.  Ethan is listed at 5’8,” though that may be generous, and he weighs in at 155 pounds.  The 40 yard dash reported time of 4.62…well, I won’t quibble with it; it might be the most accurate of anything reported about Ethan.  He is what people from Barbourville, Kentucky call quick as a hiccup.  Once he breaks into your Defenses 2nd level, and he does that in no time flat, he has the jets find pay dirt.  Ethan is a multiple selection to Team Kentucky FBU, has been selected to the East-West Kentucky All-State Game and has been before selected to the Kentucky Future Stars.  Ethan also plays CB on defense and, with his ability with the ball in his hands, Kentucky Prep Gridiron forecasts Ethan will play both in High School and may play either in College.

Now, Ethan, at least presently, lacks the heft to be an every down Running Back, but as a change of pace guy, being slipped screens while lined up in the slot, and as a special teams’ return man, in both the punt return and kick return games, Ethan would be an important weapon in the Kentucky Future Stars’ arsenal this Summer in Clarksville, Tennessee.   With his top end speed, Mills is certain to continue to be called upon in High School to play Corner but his skill set at RB is what sets him apart at this stage of his career.  What is the most impressive thing about Ethan when I watch him run with the football from scrimmage is his vision.  He has an excellent feel for from where the heat is coming and is able to juke or cut at just the right time to break the Defender off at the ankles.

Kentucky Prep Gridiron believes Ethan Mills is a Varsity Letter Winner as a freshman in High School, at the very least, and may be a freshman starter. We predict he will certainly be in Clarksville, Tennessee playing for KY Future Stars should he wish and let’s hope he does.

Epilogue:  Just as we thought at KPG, Ethan has made the Kentucky Future Stars Team and will represent the Commonwealth of Kentucky in Clarksville, Tennessee on June 17, 2017!