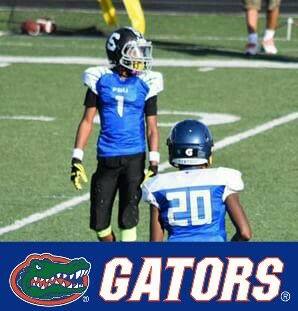 Two-time All-State selection Bryce Yates has for what you are looking in a Cornerback and a Quarterback both at this level and at the next.  He’s the son of a coach too…so check the box marked football IQ.  Bryce has been out on the State Level and has made both Kentucky FBU’s Team Kentucky and played for the Kentucky Future Stars 7th grade team last year.

Bryce has exactly the skill set for which you looks in a next level DB, and in Kentucky Prep Gridiron’s opinion, particularly at corner. Bryce is 5’9″ 130 who runs a 4.9 hand timed forty and pro-shuttles in 4.46.  When he gets fully acclimated to the DuPont Manual High School weight program, wait till you see what happens to that forty! The 4.46 shuttle time means he has the spacial quickness to flip his hips and get over the top of the vertical route making him a hard corner to shake.  That spacial quickness also means he can stop on a dime and come up and play run, where he reads it, and has the top-end speed to close on the ball-carrier in a hurry, where the need arises.

Kentucky Prep Gridiron hasn’t the slightest hesitation in predicting Bryce Yates will be in Clarksville, Tennessee this summer and that he will earn a Varsity letter for DuPont Manual High School next year where he is projected to play QB and Corner at the next level.  Kentucky Prep Gridiron has no trouble also predicting Bryce Yates is a future Saturday player provided he continues to develop his speed and upper body enabling him to add quickness and speed and effectively jam high school receivers when pressing up at the line of scrimmage preventing the WR from getting into his route.