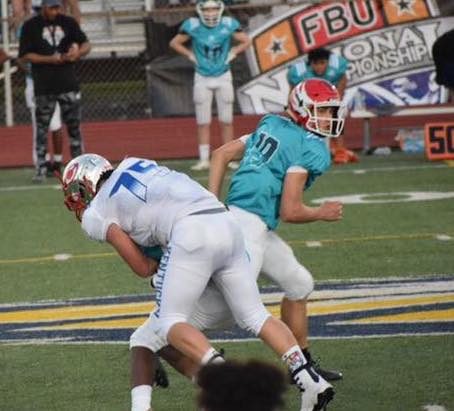 Franklin West is a prime example of why publications like KPGFootball and services like FBU are so very valuable. Franklin West has become our top-rated OL in Kentucky’s 2024-class. He’s near the top along the defensive front too.

You hear us talk about “ghosts” especially when it comes to highly ranked middle school players. For those of you “catching up” (we get new subscribers daily), a “ghost” is a player who, while outstanding, you can “search” the player’s name and still not learn anything substantive about him.

For instance, take Franklin West as KPGFootball’s “exhibit “A.” Franklin has played on Team Kentucky’s FBU Elite team for three years. He led his 8th-grade, middle-school, football team to the KYMSFA Championship game, and was selected to attend the prestigious “Top-Gun” combine for the finest players in the country in his age-group.

You would not believe the time it took me this morning to come up with pictures of him. I had to practically convene a Kentucky-wide posse to determine an approximate height and weight. I don’t know anything about his speed, straight ahead or directionally, and the kid has combined to eternity and beyond.

His Hudl page contains clips from individual games. There are no “season” highlights.

People want to criticize us when we publish a MS All-State football team about our “misses.” They say things like, “How in the world did you miss Franklin West?”

Well, all we can tell you is this….we members of the media aren’t going to dig for it. It has to be readily available to us.

If you are looking for a “playing comparison” in his own graduating class, think “Jason Perry” who is now a member of Breathitt County High School’s roster. West has joined the Corbin High School program.

Both of these kids have long frames and are physical anomalies in the strength department, especially in light of their ages. We were able to catch up with the fullback coach at Corbin, through one of our many agents, and he estimates Franklin to be 6-2, 250-ish. You know the old saying, good enough for government work, I suppose.

We look at the kid’s frame and inordinately long arms, and conclude, regardless of what he presently measures, he isn’t anywhere close to done growing. He will gain considerably more height and bulk as he works into the Redhound football and strength programs.

Looking at the many clips of film we have reviewed, he played along both fronts for Corbin Middle School. He was a right tackle who slid inside when they needed the guard to pull or trap.

This tells us the coaching staff was impressed with his pad-level, athleticism, running speed, and ability to play in space. We saw many examples of his running defenders deep into the second and sometimes third levels. This was generally concluded with his depositing them onto the turf.

He has a good motor, plays through the whistle, locks-on well when clamped, and finishes with a nasty edge. He can play both inside and out along the offensive front.

We were equally impressed with him as a defender. Corbin moved him around some, as he drew double and triple teams even as late as the semis and championship games in the KYMSFA. Inside he has excellent leg-kick and explosion and is able to gap and pursue, arriving at backfield targets before they can do much about it.

He soaks up doubles well and exhibits the strength to shock, split, and shed would-be blockers. He scrapes either direction well and has sideline to sideline range. This tells us something of both his strength and change of direction speed.

His attributes look extraordinary and the film we watched was of him playing deep into the playoffs. This means the guys trying to block him weren’t exactly dogs, though he made them look like such.

We were impressed with his pad-level, as he played at or below blocker’s hands which enabled him to easily gain access to the backfield. Of course, the sledding will get a bit tougher as, in high school, he will face linemen as strong or stronger, as fast or faster, and as quick or quicker. That, however, won’t be the case more than maybe the first half of his freshman year.

This kid in every way appears to be an early starter for Corbin along its front. I would probably plop him down beside Logan Smith, an All-Stater drawing huge recruiting heat and rising senior, and ask Smith to help West as long as Smith believes West needs the help. Afterwards, turn him loose.

This is one of those seminal moments on KPGFootball where I am going to advise readers and subscribers to write down this name. This kid, as far as an elite player in his graduating class, will only gain in fame and status.

Get used to seeing articles written about him. This kid isn’t going anywhere.

He will start out on the big-state and under the bright, Friday-night lights, and he will be with all of us a while. Man, I am looking forward to watching this guy!