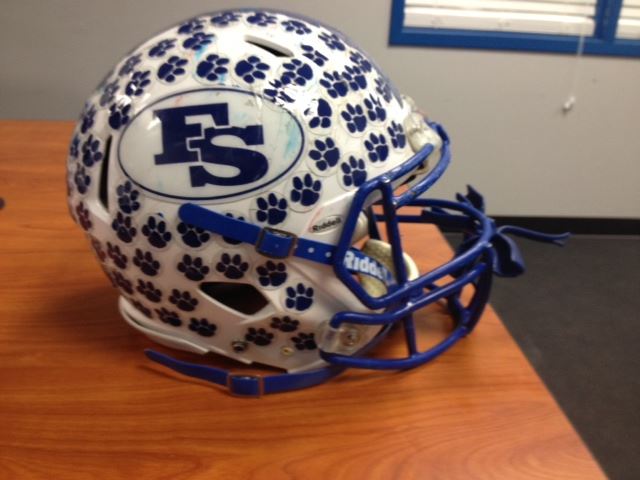 We believe we are unmatched in picking the winner in Kentucky high-school football games and we generally do pretty well. We entered this weekend 40-6 on the year and hit many games close to on the number.

However, the Covid-19 cancellations and teams playing teams for whom they aren’t really prepared and the lack of attendance providing the home team with momentum and adrenaline is taking its toll on the outcome of games. We are seeing it at the college level too, so its a legitimate phenomenon.

Hoptown surprised us the most this weekend in the District 1, Class 4A “Loser may be home for the playoffs” match with Madisonville. Just don’t know from week to week which team is getting off the bus.

Friday night, the team which beat Henderson County to open the season appears to have shown up as Reece Jesse, Jr. had a big night (on both sides of the football) and the running game got uncorked as did the quick-strike passing attack.

We were also surprised by the Franklin County/Central score. Honestly, Franklin County has a roster full of talent second to none in the classification and they were at home, which doesn’t seem to mean a darn thing in the Covid-19-world.

If we are going to crow when we are right, we should take out lumps when we are not. Only 9 of the 12 games we picked were played. We went 5-4.

That is a horrible job on our part. No way to sugar coat it. We will pull ourselves up by our boot-straps and soldier on from here.

We are now 45-9 on the year! The following is our scorecard.

Game one: Elizabethtown at Bardstown

Our pick here just might surprise some people. E-Town is the top ranked team in this week’s Associated Press weekly top ten for the 3A classification at 6-0. Bardstown, also 6-0, is ranked 4th. This is the biggest matchup of the weekend. In a mild upset, and because Bardstown is at home, we like them to upend the Panthers from E-Town.

Okay, Matt Anderson, from Pike County Central had a huge night against Magoffin in rushing for over 400-yards and breaking the Kentucky record for TDs in one game with 9. All we can say to that is, better look around at the CAM on Friday night because that team in read ain’t no Magoffin County if you know what I mean.

How good are the boys from Whitesburg, Kentucky (Letcher)? They are undefeated, have beaten both Rockcastle and Harlan County, and are ranked 6th this week by the Associated Press. Translation…they are pretty darned good. Of course, Johnson Central is the defending state champion in the classification, undefeated and top ranked in this week’s 4A poll, and playing at home. The fact we think Letcher will keep this one under 14 should show you in what high regard we hold Letcher Central.

Johnson Central won 62-0, 2-1 (We have been drinking the Letcher County cool-aide. JCHS has slapped us all back to reality).

We are thrilled Knott has come back from the “red” and has been able to resume play. After its trip to Bell County and Middlesboro this Friday night, they may want to reconsider playing the remainder of the season’s slate of games. Middlesboro is a really good ball club.

Middlesboro won 52-0, 3-1 (There aren’t but two legitimate football teams in District 7, Breathitt and Middlesboro. They will replay for the District Title in round two on the Riverbank).

Hancock County has some of the best young talent in the 2A classification and broke into the AP top-10 poll this week, after beating Owensboro Catholic, at number 6 with its 5-0 record. McLean runs an offense which can pose problems for teams which don’t face its like often and McLean is the defending district champions and regional runner-ups from a year ago. Can Hancock handle high expectations for a program not accustomed to them? That is the only real question here.

Game was pushed to November the 6th because of Covid-19, 3-1

Greenup County is coming off an impressive road performance in which it pushed Class 2A power Breathitt County to the final play on the Riverbank. Of course, Ashland Blazer is among the favorites to win the whole thing in the 3A classification this year. These kids are all from the same county so there will be a ton of familiarity here. Great performance last week, Muskateers, but we’re afraid it is back to reality.

Game got cancelled for Covid-19, AB played Bell County instead and won 35-0, 3-1 (At least Ashland Blazer has show itself as being as good as we have been saying).

If you would have told us this game would be for top-seeding in the first district of the 4A classification this preseason, we would have certified you straight crazy and called for the guys with the straight-jackets to throw you in your spanking new rubber walled room. Still, here we are and Calloway County is ranked 10th in this week’s AP poll (huh?) and poised to seize control of the district; if it can get by Logan County.

Now, that may be the rub. Logan County completely destroyed a Hoptown team (31-7) Calloway struggled to beat at home (14-7) and which is in full downward spiral with no one knowing for sure where the Tigers end up bottomming out. Can Chris Champion’s Lakers overcome Logan like it did usual heavyweights in that district, Hopkinsville and Madisonville North-Hopkins? Our answer…good night Cinderella!

Logan won 14-6, 4-1 (Logan owns District 1, but a home tilt in Round 1 with the 4th-seeded Tigers from Hoptown would be dangerous. If the right Tiger team unloads off the bus, they have plenty of talent to win that game in Russellville. Would be the first 4-seed over a 1-seed in the history of the KHSAA playoffs since going to the present 4-team from each district format)

Remember when Estill County made a furious comeback to nearly erase a 35-14 deficit and lose to Breathitt, to open the year, 60-43? Remember when Bell County dropped a game to Rockcastle County on the road 13-7? Well that was before we realized how bad Breathitt is on defense or just how good Ty Nice is as a dual-threat QB or how good of a team Scott Parkey has at Rockcastle. With age comes knowledge.

Game was cancelled by Covid-19, Bell lost to Ashland-Blazer 35-0, 4-1 (We are starting to become doubters concerning Coach Hilton’s Bell County team. Sure AB is good, but 35-0?)

Danville is a traditional heavyweight in the 2A classification. They went 15-0 and won it all as recently as 2017, which seems like a thousand years ago to many in Danville, Kentuckians these days. Still Danville opened 3-0 with many proclaiming the Admirals back; then they were drowned by Somerset 42-3. They want be shown any quarter this week as they take on 2A’s top ranked team which is coming off a big road win over that same Somerset team. Best hope for Danville is if LCA looks past them or is still groggy from its victory celebration a week ago.

Lexington Christian by 22 (and we are being kind and assuming LCA is looking past the Admirals a bit, or this may end up way worse)!

LCA won 34-30, starting QB and RB were both held out of the game, 5-1 (LCA dodged a bullet here with Nieves and Brown both sidelined for this game)

This game pits two of 4A’s very best football teams. Man-o-man are there people in Kentucky sleeping on Franklin County. They were one of our favorites to win it all preseason and still are right now. They will make a statement against a team many believe perennially to be among the classification’s most talented rosters in Central.

Central won 18-16, 5-2 (Dantzler can flat-out coach, Central is one of the more under-appreciated teams from a football area rich in talent and laden with quality teams. Does the JCPS Friday ruling mean they are done for the regular season?)

Last year at this time, Hopkinsville was getting ready to be seeded first in the district round of the KHSAA playoff and Madisonville was about to begin a run to the semifinals of the KHSAA 4A classification. My how the mighty have fallen around District 1. Both teams are 0-2 in district play, with North (0-2-1) showing a “tie” because of a Covid-cancellation, in-district, yet to be replayed.

As things stand presently, that means the first district is ordered as follows: Calloway (2-0), Logan (1-0-1), Central (1-0), Hoptown (0-2), and Madisonville (0-2-1). Here’s where we are if the playoffs followed this weekend’s games. The winner of Calloway/Logan is the district one-seed; and the loser of Hoptown/North-Hopkins will be sitting out this playoff run, getting ready for basketball.

Wow! For those of us who have covered the first-district for many years, how did we even get here? It is mind-boggling to even consider.

So Friday night at the Stadium of Champions, we are calling North-Hopkins at Hoptown, District-1’s Fight for Fourth! KPGFootball is 40-6 picking games on the year. Two of our six losses are because of a Hoptown team which lost to Calloway when favored by 41 and lost to Logan when KPGFootball picked Hoptown to win by 3. The final in that one ended up Logan over Hoptown, 31-7. Game wasn’t even competitive. To say they have disappointed this year is an understatement.

Hoptown, we aren’t picking you guys again until you prove you can beat anyone in District-one. This is Hoptown’s week to show KPGFootball up (again) because the Tigers figure to be favored at home in what should have been a fight for first but is a war for worst! Why are we picking the Maroons? Because, twice bitten, thrice shy…

Hopkinsville won 44-0, 5-3 (Our scout watching the game for us, “Wow, North-Hopkins doesn’t have anything left from off last year’s squad. They are absolutely terrible.” His words, not ours!)

You want to talk about how the mighty have fallen. As recently as 2018, the Wildcats were polishing off its second consecutive 4A-title and folks around Johnson County, Kentucky were wondering if Jim Matney (Johnson Central) would ever be able to beat Franklin-Simpson. Guys, Franklin-Simpson wasn’t just winning championships, they were running Johnson Central off the field in Lexington.

Now, just two years later, Franklin-Simpson is 1-3 with its only win against hapless Warren Central. The mighty Wildcats have lost to 1A Russellville and district foe Allen County-Scottsville, on whom the Wildcats were annually accustomed to running the clock by half-time. Put this in your pipe and smoke it…if Warren East beats Franklin-Simpson, Friday night, the Wildcats will be the 2nd-district’s 4th-seed in the playoffs. What? Crazy!

This game is a pick-em’. These teams are equally matched and it is literally a coin-toss on which one wins. The sucker bet is to take Warren East because they are at home. Then again, WEHS is unaccustomed to winning this matchup, but that didn’t stop ACS from winning by three scores.

What the heck, we’ll go with Jeff Griffith’s “Raiders.” After all, they have a senior at QB in Nolan Ford who has been at the helm since a freshman and they are at home and coming off a convincing win over an ACS team which handled Franklin-Simpson easily.

Franklin-Simpson won 35-28, 5-4 (Warren East never wins this game, why should this year be any different? This was a rookie mistake here).