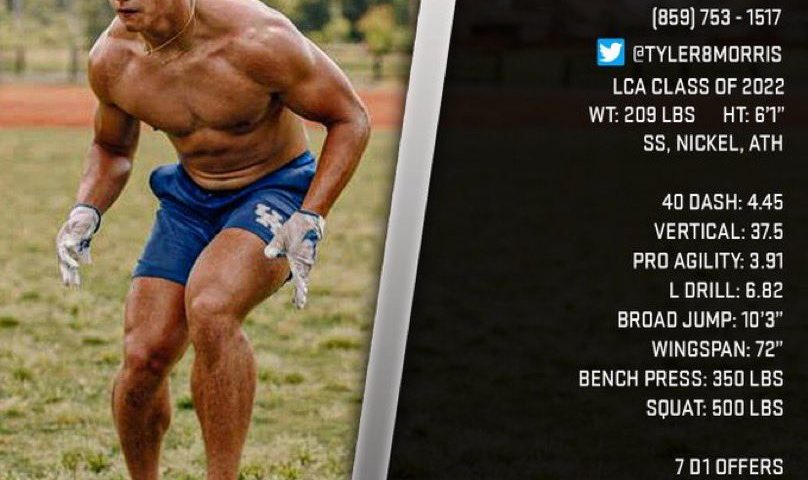 [Tyler Morris] shall not pass this way again—Eva Rose York, 1900

Kentucky Sports Radio (KSR) has dropped a Kentucky High School All-State Football team. As I have said for years, it has done exactly what it was meant to do…it has stimulate debate and brought attention to the game we all fanatically love all over the commonwealth of Kentucky.

The players featured were by many accounts deserving of such an honor while there were some glaring omissions. The same can and will be said about every team which drops from this point forward, including teams for which this publication is a registered voter.

One guy we believe should have been included on KSR’s team was LCA’s Tyler Morris. He is an uncommonly good linebacker who is 6-1, weighs 210 pounds, is built like a Greek Adonis, and clips off 40-yards in 4.45-seconds on the laser.

How do I know he is among Kentucky’s finest? Well, he has been offered a scholarship to play college football for the Navy Midshipmen in the FBS, Division I. That is all the evidence I need.

That is his All-State team. Isn’t that enough?

Famous Poet, Eva Rose York, authored a poem I have always favored entitled “I Shall Not Pass this Way Again.” It was the speaker’s goodbye to a place she loved, and where she had thrived, to declare her future intentions of going forth from that place never to return.

She could well have been talking about Tyler Morris. He has been an amazing high school football player.

In KPGFootball’s humble opinion, he has been among the best second level defenders to play the high school game in Kentucky for at least three years but particularly in ’21. His equal shall not pass this way again.

Was he celebrated for his immense talent sufficiently by his peers? Probably not.

Was he adequately rewarded for his hard work under the Friday night lights? Undeniably so.

In the end, it matters very little whether you or I think Tyler Morris either was or wasn’t an All-State football player in Kentucky in ’21. Well, my opinion means a little more than yours, but I digress.

In the end, no less than the United States Government believed Tyler Morris to be among the best the commonwealth had to offer this past season. In fact, the Midshipmen were willing to wager quite a bit on that.

To quote the poet, Eva Rose York a final time…

“…Then, O, one day/May someone say-/Remembering a lessened pain-/Would [he] could pass this way again.”