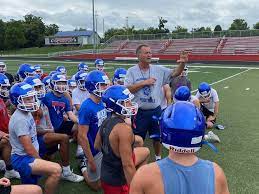 Incidentally, we are 22-2 on the year. It will be interesting to see how well or poorly we do this week.

Here is this week’s version of the “dirty dozen” football games to be played this Friday night and who will win and what the likely score will be. Good luck everyone!

There are darn few times a 1-6 ball club, which was a single point or two from 0-7, will ever be picked over a ranked 6A club. Especially a 6A ball club boasting a 4-2 record and the type of talent the Bruins have on the roster. This looks to be one of those times.

We like the Shamrocks in this one. Sorry, Ballard!

We think Mark Palmer was an excellent hire at Anderson County. He entered the job with darn little in the cupboard.

The Bearcats have come a long way from the team which went winless in Palmer’s first year. This seems especially true in light of Palmer getting no offseason a year ago to install his system.

That being said, I don’t know of any coaches in Kentucky who get anymore out of its roster talent than David Jones and his staff at Bourbon County. Bourbon just keeps improving, week after week, year after year. Player and team development are two of the surest signs of an excellent coaching staff.

We like the Colonels in this pivotal district matchup.

Other than that one team, both of these teams have beaten every opponent faced. That all ends this coming Friday night.

We like Boyle in this one. We believe it will be tight for much of the night.

Joe Chirico won a title at 1A Paintsville and bolted for Class 6A where he has found the sledding a bit tougher. Bryan Station has been good since Phil Hawkins unpacked his bags from his stint at Owensboro Apollo.

One has to figure Bryan Station will win this game. Many people are expecting a blowout.

We are not among those people. It should be a comfortable margin.

Ran into some Central ball players over the weekend. I asked them how they were enjoying Coach Mike Holcomb. They reported loving him.

Well I reckon they do, being honest with you. I mean, Central won all of two football games in ’19 and ’20 and are 5-1 this year and looking better and better as the season progresses.

The team looks to be gelling and improving. That’s what hiring a coaching legend nets for a program, especially one with plenty of talent walking its hallways.

It isn’t either of those times. It is now! Right now, we are taking Madison Central to win this game by 11.

The Storm (Hopkins County Central) has the best QB in the western end of Kentucky (Adrian Stringer). They have gotten top-10 votes the last few weeks in the AP poll.

Chris Champion is one of the better young HFC’s in the high school game. He has Calloway County in games they shouldn’t be in and winning games they never won prior to his tenure.

Sorry Storm, but we think both teams leave Friday night with matching 4-3 records. We are taking Calloway in this one.

Remember the Cinderella story? Girl abused by her mother and evil step-sisters made to clean all day in rags but scores an invitation to go to the ball where the Prince will select a beautiful maiden to marry. Cinderella ends up capturing the Prince’s heart. Does this sound familiar?

Well, Clay County has come to the royal ball uninvited. They are sitting 4-2 this year and evil sibling, Letcher County Central, is rolling into the ball the Crowned Prince of 5-1. Bad news for Clay, balls over for this Cinderella! Letcher going away here is our call.

We are big fans of Louisville Saint Xavier’s football team. We think there aren’t too many teams in Kentucky which can play with them. Obviously, Male can beat St. Xavier and we wonder whether LCA could pull it off.

Another team we don’t believe capable of beating St. Xavier is Louisville’s DuPont Manual, though no Kentucky team has beaten the Crimsons this year. This one will be a one score margin or less. In the end, we like St. X.

This game may seem like two mules fighting over a turnip in a sack. Neither one of these teams are very good. If this game was being played in Hindman, Kentucky we would pick it differently. These two teams just may stalemate.

Mark Dixon has done a fine job coaching up the Commodores from Perry County since arriving from Hazard. Still, there is a big difference in beating Paintsville on the road (which was right impressive) and playing with the Johnson Central High School Eagles.

Are the Commodores ready for a team which seemingly challenges for the title in 4A every year? No.

AB is righting the ship and has come off a big win over E-Town, a team it played on Kroger Field a year ago when it won the title. East Carter is having a heck of a fine year.

All good things must end. We like Blazer here.

We believe Ty Niece for Estill County is one of the more exciting athletes in Kentucky’s class of ’22. We don’t know where he will end up playing in college, or at what position; but we believe his playing somewhere is a foregone conclusion.

The Engineers have the blueprint to build a rout here. We expect they will.