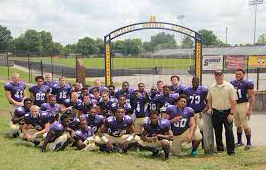 Last week we peeked at the 5A classification and have forecasted the first five classifications in five previous weeks. Today we conclude this series with our “top five” preseason for Kentucky’s highest classification, 6A.

In this week’s discussion of Class 6A, there may be some surprises. Here is how we see it. Feel free to disagree.

Nic Schutte (’22) returns at the controls of the offense and with Jaylin Bross (’21, RB) matriculating to the college ranks having a solid player at QB will help. Daniel Swinney (’23) looks to take over the RB duties in ’21. He was the second leading rusher a year ago and gained 408-yards in only 48-carries, scoring 7-rushing TDs.

Matthew Ford will help with some of the heavy lifting Bross left the backfield. He gained 293-yards on 43-carries and scored 5-TDs a year ago.

Male returns one of Kentucky’s marquee WRs in the ’22 class in Wisconsin Commitment, Vincel Anthony, Jr. (’22). Anthony caught 34-passes for 539-yards with 8-TDs receiving in the plague shortened ’20 season.

Max Gainey ain’t no dog as we like to say. He was only a freshman a year ago and the ’24 prospect still caught 21-passes for 238-yards and a pair of scores. Look for those numbers to increase exponentially.

Losing PK Micah Lackey from a year ago hurts. However, Lance Dossett (’23) made the most of his chances in ’20. He converted all 11 of his PAT opportunities.

Defensively, Selah Brown is the most highly regarded DE Kentucky has produced in a  while. The coveted 4-Star lineman had a big year as a junior with 12.5 TFLs, 3-Sacks, a pair of FRs, to go along with his being third on the team in total tackles.

Brown will be joined along the front by Jayshawne “Shizz” Monroe (’22) who is one of Kentucky’s finer space-eaters along any defensive interior. Shizz’s little brother, Jeremiah “J2” Monroe (’23), is a rangy, lengthy, DB considered among the best in the commonwealth.

J2 has drawn major, D-1, FBS interest from several schools. He will be patrolling the defensive back-end for the bulldogs.

Jeremiah Collins (’23) will be back in the 3rd-level defensively with J2 Malone. Collins had one of the team’s 2 “pick-sixes” in ’20, returning his effort 45-yards to pay dirt. Antojuan Weathers (’23), who many believe will ultimately be a RB, had the other “pick-six,” returning his 10-yards.

Mekhi Smith (’22)  is one of the more versatile threats in Kentucky 6A football. The sometimes QB, sometimes WR, has been spending more time at WR.

Smith was the Tigers’ leading scorer a year ago. He registered 5-rushing TDs, 4-TDs receiving, and a housed kick off for his 60-points.

Defensively the Tigers return Jaxon Panariello (’23) at linebacker. He was splendid in ’20 with 49-tackles, 5-TFLs, and two sacks to go along with a FF and a FR. Can’t help but wonder how many times St. Xavier has been led in tackles by a sophomore?

Micah Carter (’23) joins with Panariello to form a tough tandem to beat in the now junior class. Carter is a top-flight DE who was among the leaders for the Tigers’ defense a year ago with 3-QB sacks. Carter, the 6-5, 250 pound DE, is sporting many Division I offers to play football already with more sure to come.

LeAndre Maxwell should scream off the other end. The ’22 prospect enjoys a reputation for being one of Kentucky’s finest at his position.

At the all-important PK slot, made even more important by the parity enjoyed in 6A at the top of the classification where games and championships are often decided on a kicker’s leg, Cameron Tegge has moved on to play for the Colonels at Centre College and he was very, very good. Good thing the Tigers have up and coming, ’23, stud kicker Nolan Wolford to pick up the slack.

I know I will hear a ton of crap about picking the all-time most successful program in Kentucky football as low as third in its classification. If it is any consolation, if “Trinity” wasn’t on the front of the jersey they wouldn’t make my top-8.

They were completely decimated by graduation. They have almost nothing recognizable returning.

They do have Armon Tucker. Tucker returns for Trinity at RB.

It is a good thing too because whomever takes the reigns of the offense over from Nathan McElroy is liable to be pretty green at QB. A good RB can mask that over for any team.

Over an abbreviated junior campaign, Tucker still gained 819-yards rushing in 128-carries and 13-rushing TDs. Second on the team a year ago in scoring.

Kellan McLaughlin returns to take over the place-kicking duties from Will Zanchi who graduated. McLaughlin was 25 for 25 last year in PATs and converted 2 of his 5 FG attempts. The ’23 prospect is more than serviceable.

Upfront defensively, the Shamrocks will have to turn to Elijah Davis. Davis (’22) can play anywhere from nose to the DT slot. Davis played sparingly in ’20, but he did record tackles and even recovered a fumble.

Cole Wickliffe is the leading returning tackler. He was only a sophomore in ’20 and was 16th on the team in tackles. He played in 9-games and registered 11-tackles.

Top tacklers 1-15 all graduated from off of the defense people claimed may have been the greatest in school history. The “stoppers” only surrendered 48-points in 10-football games.

Wow, that is pretty stingy and an incredible honor to called the greatest defense to ever play at Trinity. This is especially true considering some of the defenses the Shamrocks have before put on the field.

William Zabel (’23) returns and he intercepted a pass a year ago. Folks around the program are high on Cameron Wooten (’24) who put a pick in his column a year ago.

Nobody did a finer job coaching up his team a year ago in the 6A classification than Phillip Hawkins. We weren’t the only ones who thought this as he was named the Coach of the Year by several end of the year publications.

No one saw the Defenders from 6A, District 8, going 10-2 a year ago. That’s why the job he did was so enormously credited.

Mikaleb Coffey will have to be replaced at QB. Having a big-time RB always seems to ease such a transition.

Joseph Bond, ’22, came up huge for the Defenders a year ago. Bond gained 1,395-yards on 179-carries, 15 of which he carried across the goal-line, while catching 6-passes swinging out of the backfield. Bond was the team’s leading scorer in ’20.

Amodeus Taylor, ’22, had a year himself. He gained 543-yards on 69-carries with 5-rushing TDs. Wait until we get to the defensive side of the football.

AhTraivon Jenkins may be the finest ’23 prospect at the WR position anywhere in central-Kentucky. Jenkins caught 45-passes in ’20 for 783-yards receiving with 7-TDs.

Carl Munford, ’22, had 53-catches for 745-yards receiving, contributing 7-TDs of his own. He certainly was no slouch a year ago and may be among the finest in his graduating class.

Xavier Hale has moved along at PK. However, ’22’s Terik Mulder converted 5 of his 6 PATs in ’20 and he is back to handle those duties.

Defensively, Giovanni Watson has taken his skills to college where he will be vying for PT on the K-Dub roster. Jason Hocker, ’24, is back and no-one outside of Hawkins’ team in District 8 is too thrilled about that.

Hocker led the team with 78-tackles last season. Hocker also recovered a couple of fumbles. Hocker in the plagues shortened ’20 season recorded 6-TFLs and a sack.

Amodeus Taylor, ’22, had 74-tackles, 11-TFLs, and 3-QB sacks to make him one of 6A’s best, two-way contributors, Kentucky-wide. Remember him? We talked about his running/receiving production just a few paragraphs prior.

Yedideyah “Sledge-Hammer” Sledge, ’22, returns. All he did a year ago is record 7-TFLs while leading the team with 5-QB sacks.

The back-end of the defense will continue to be patrolled by ‘23’s AhTraivon Jenkins. Jenkins tied for the team lead in ’20 with 2-interceptions and had one of the club’s 3 “pick-sixes” accentuated by 100 yards worth of interception returns.

Dunbar’s QB, Jake Smith, has graduated. He will be missed.

However, getting over the loss of a QB is easier when you have a running back like Kamarion Robinson (’22). Robinson gained 815-yards a year ago in 10-games on 163-carries.

Robinson also scored nearly 40% of the team’s rushing TDs in ’20. Robinson was effective out of the backfield in the passing game too. He caught 9-passes, two of which were for TDs, for 100-yards in ’20.

Andrew Jones returns and he is one of the better LB/DE/TE combo guys you’ll see in the Kentucky HS game. Jones had 5.5 TFLs, 1.5 QB-sacks, and a 55-yard “pick-six” to his credit in ’20. He also caught 9-passes for 98-yards and a couple of scores on offense at TE.

Not many players play both sides of the scrimmage line at the 6A level. Few do it as well as Jones did a year ago.