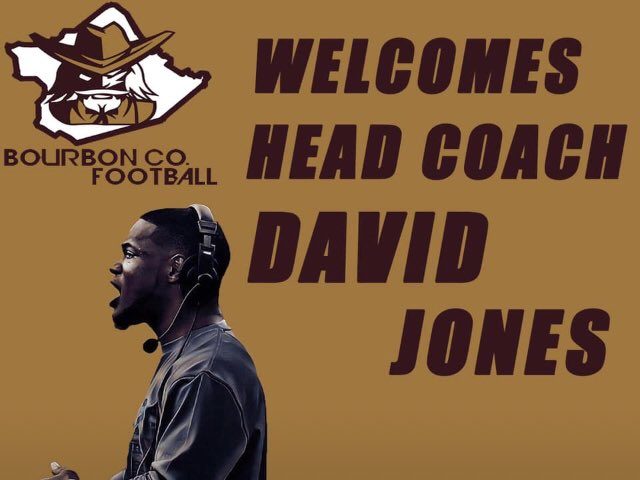 Please your honours, said he, I’m able,/By means of a secret charm, to draw/All creatures living beneath the sun,/That creep or swim or fly or run,/After me so as you never saw!…“Pied Piper of Hamelin,” Robert Browning.

These words were written about a man who lent himself to a city to rid itself of its problem with overwhelming vermin infestation. These words are equally true about the fact players both love and want to play for David Jones. Many would be willing to follow him into the depths of Hell if given that chance…like he’s some sort of Pied Piper…like he has access to some sort of secret charm.

That is how he was able to turn around the incredibly dire fortunes of the Phelps High School football program and lay a foundation of respectability. That is how he will immediately chart a new trajectory for a once proud Bourbon County Colonel football program which went 3-8 in 2018 but had been 7-5 in 2017, 9-4 in 2014, and 13-1 as recently as 2013, losing in the semis to State Champion, Belfry 21-13, a coaching staff at Belfry on which David Jones was then serving.

Coach Jones will inherit a young roster losing only 10 seniors. Of course, some of the seniors will be rather had to replace. CaMarr Myers gained 1,184 yards rushing in 2018 with 19 rushing TDs to lead the team in scoring. Myers also caught 19 footballs from out of the backfield for 314 yards and 4 TDs receiving. CaMarr Myers was a two-way player and contributed 64 tackles to lead the defense too. Brother Shemarr Myers returns and he had 44 stops in 2018.

Other dynamic playmakers additionally return. Jake Broughton recovered 3 fumbles in his 11 games of action, though his being a QB may lend to that particular stat an altogether different connotation. Dylan Kirk, who may have only played in 9 of the games, still contributed 39 tackles, 7 TFLs, forced a fumble, and tallied 3 of the team’s 4 QB sacks. Still a team which surrendered 427 points in only 11 games, while failing to score sufficiently to keep pace with what was being surrendered, will have to drastically improve on defense to play football commensurate with its former glory. Enter defensive minded, David Jones.

Offensively, where the Colonels equally struggled in 2018, they do return QB Jake Broughton. Broughton, a class of 2021 prospect, completed 105 of his 219 passing attempts last season for 1,257 yards and 10 TD passes against only 5 interceptions. One of Broughton’s favorite targets, Kaygen Heflin will be back. Heflin caught 28 passes in 2018 for 334 receiving yards and 3 TD receptions. These numbers appear quite modest, but it should be noted (once again) both Broughton and Heflin were sophomores in 2018.

The 2004 graduate of Belfry High School played on two State Championship teams under legendary head coach, Philip Haywood, before going on to star for the Kentucky Wildcats under Rich Brooks. Jones played for the Baltimore Ravens in the NFL, as well as a stint in the Arena League. After his playing career was over, and before landing at Phelps, Jones was an assistant, under coach Dudley Hilton, at UPIKE and then assisted coach Haywood during the Pirates run of Class AAA state title game appearances (2013, 14, and 15), according to an article which appeared in the Williamson Daily News and authored by Jarrid McCormick.

All of his excellent pedigree and opportunities to learn the coaching profession from mentors so very proficient at it aside, the fact the players both love and are willing to follow and play for him is still, perhaps, Jones’ most pronounced job qualification denoting a high likelihood of success. Simply put…Jones develops talent, and then places that talent into the next level, better than any other coach in Kentucky High School football today. Whether by secret charm or however he’s able to do it, men come out for football to play for David Jones. Whether by secret charm or not, they creep, swim, fly, and/or run to be on his side-line to learn to play the game from one who has, thus far, shown himself mighty proficient at teaching.

Reporting for KPGFootball, this is Fletcher Long congratulating the Bourbon County Colonels on its excellent hire. Remember Colonels, ball out and, oh yeah, PLAY THROUGH THE WHISTLE!