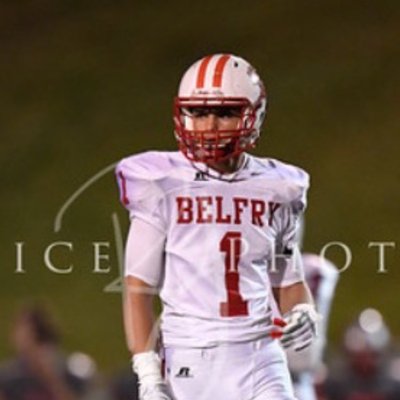 I know I write a lot about the Belfry Pirates’ football team. Of course a major amount of my subscribers and people who buy my articles are from Belfry. Writers like to be appreciated and are grateful when you read, and especially buy, their work. What I am truly saying is it is you, the reader and the subscriber, who guides and determines the topics of this magazine, just like any other. If I could have the perfect linebacker corp composed of Kentuckians with the best college potential  to play the respective positions in Division I, I would have Justice Thompson (Ballard, 2021) and Austin Gough (Owensboro Senior, 2021) inside, with Seth Mounts (Belfry, 2021) and Grayson Cook (Belfry, 2020) outside. It says something, to me at least, that two of my four dream linebacker prospects play on the same high school team. Seth Mounts has all the tools for which I look at the position of OLB, on the week-side (side opposite the left tackle).

Seth Mounts is a rangy kid at 6-3 and 190 pounds show is agile and athletic and exhibits in his film, linked below, outstanding ability to be read and react with the strength to take on the run and the agility to rush the quarterback. Seth has what I call cover quickness as he has speed (4.8 forty) but he is quick to the ball with explosive change of direction (4.8 pro-agility shuttle). Seth is certainly strong, especially in light of the fact he is between his freshmen and sophomore seasons (245 bench press, 350 pound back-squat) but what is more important than weight-room strength, especially at Seth’s position, is field strength. If you watch Seth’s highlight film from a year ago you will note he exhibits the strength to shed blockers and get himself in position to make plays. Seth is physically able to disengage from blocks and bring down ball carriers. In addition to his strength, Seth also exhibits bend, the ability to dip his shoulder and evade the hands of blockers with the flexibility to flip his hips open, change direction, and run with the receiver.

Seth is a 4.0 student whose offensive position is QB. While we like him at OLB here at KPGFootball and believe that is where most colleges see the Class of 2021 prospect, the fact he has the football IQ and leadership qualities to quarterback an offense lend itself to his ability to, likewise, quarterback a defense which linebackers are often called upon to do. Seth has made so many All-American teams already in his career the list of the many teams to which he has been selected is too numerous to recount here, as we believe we have listed the different teams in prior features. We do want to mention he made our AFI-KPG Freshman All-State Football team as an athlete.

Now you may wonder if he is one of our four dream linebackers why wasn’t he selected at that position instead of the nebulous athlete tag? Well the answer is that had we been picking on college potential as a prospect at the position, he would have been, but we were selecting linebackers based on how they had played over the course of their freshman seasons. Seth had a fine year with 53 tackles, but there were freshmen linebackers who had outperformed him in that all-important statistic quite dramatically. However, we recognized him as an athlete and athleticism and agility are the two of the major components of the position Seth plays so, really, what’s the difference. He was an All-Stater last season and we believe he will continue to be throughout his prep career.