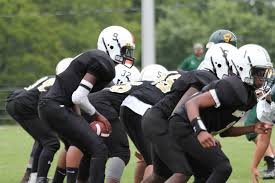 There is no doubt Anthony Woodard’s nickname of “Rooster” makes the all nickname team.  But Rooster Woodard is much more than a nickname.  Woodard has been on the All-Star radar for some time and has been a multiple selection to play for both Team Kentucky FBU and Kentucky Future Stars as well as his being selected twice to play for the West Kentucky team in the annual East-West Kentucky All-State Classic.  Although selected, no one ever seems able to get him to show up for the game.  Truthfully, the problem may be he is too good at too many sports.

Rooster stand’s between 6’2″ and 6’3″ tall and has the frame and limb length to indicate he will get taller.  He is Russellville Middle School’s best football player, as he plays QB; its best basketball player; and its best baseball player.  On the gridiron Rooster has plenty of arm strength being able to stretch defenses with his ability to make all the throws on the route tree and, should he get outside the tackle box, he is deadly with his feet too.  He’s a fantastic football player who figures to play a lot at Russellville High School next year if he isn’t the game one starter at QB for a team who is a 1-A, Kentucky football power.

Kentucky Prep Gridiron can’t possibly forecast what all-star team for whom Rooster will play this summer as it is certain he will gain selection but improbable he will show up for the game.  I am sure the Rooster will probably be playing baseball when the Tennessee-Kentucky show down in Clarksville occurs.  Nevertheless, Anthony “Rooster” Woodard is easily one of the top 3-5 QBs in the Commonwealth of Kentucky and, as such, we have elected to feature him here.  Better watch this one as his star will continue to shine though, in what sport, I cannot possibly foretell.