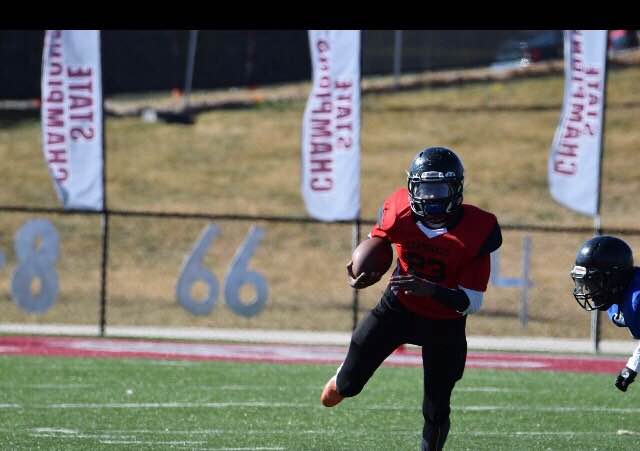 LaVell Wright is one of the best pure athletes in the Commonwealth of Kentucky.  He’s 6’0″ tall and weighs in at a stocky, but still lean, 180 pounds, has incredibly long arms, runs the forty in the mid to high 4’s depending on surface and weather, and reportedly dead lifts 455 pounds.  It is no wonder LaVell played both RB and OLB for Coach GJ Woolridge’s Team Kentucky squad on its way to Naples Florida and the FBU National Championship final week-end this year.  LaVell is not just an All-State caliber player but an All-American caliber player too.  That’s both true and what LaVell wants to hear; now on to what LaVell doesn’t want to hear…

LaVell very badly wants to play RB…so badly that he is one of the few kids who doesn’t want to get any taller.  He reports being 6’0″ now but is probably closer to 6’1″ and, with his length, is almost certain to reach the 6’4 or over height at which many conventionalists believe a player is too tall to play RB.  Kentucky Prep Gridiron sees a tremendous future for LaVell at WR.  LaVell has great hands, really long arms, runs well, and is the type downfield target CBs have fits containing in coverage.  At the Louisville Future Stars Combine, 7 on 7 portion, LaVell dropped into coverage from a FS position and became a back end nightmare for the QBs trying to fit balls into vertical routes by trying to drop balls over LaVell, which he easily picked off numerous times.

LaVell played OLB for Team KY this FBU season having plenty of speed and length to contain the sweep, and cover routes run in the flat.  Kentucky Prep Gridiron easily sees LaVell at the next level and collegiately using those same attributes to play Centerfielder for some lucky Defense’s back 4.  Kentucky Prep Gridiron declares confidently that LaVell Wright made the Future Stars Team in Louisville and that he will continue to intrigue college recruiters to become a Saturday player on down the road.