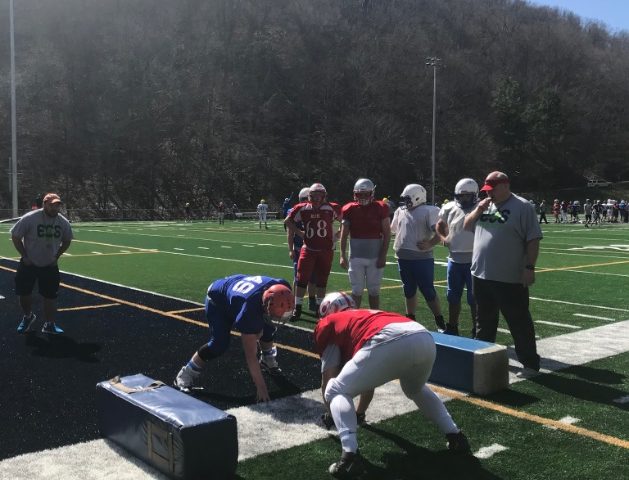 Boys, let old Coach Lyon give you one pep-talk before you take the field this coming weekend.

We have an old saying around my parts applicable here. When it was time to get serious, when it was time for the football stars to take over the game, we used to tell our players, “Boys, its time to let the big hogs eat.”

I thought of that as I traveled to take in Region 4’s last set of weekend practices before the games coming up this next weekend. My entourage and I saw the big guys in the trenches getting after it.

We saw the offensive passing game install. We saw some 11-on-11 scrimmaging.

We saw an offense bent on running it tough-up-inside. We saw a defense adept at stopping that very thing with its run-box.

Most of all, we saw a group of young men who looked to be rounding into a team. We saw the sum of its parts coming together.

The practices were run smoothly. The enthusiasm was “fever pitch.” The coaching was skilled yet frantically and purposefully driven.

The teams flew from drill to drill with purpose. The players moved from place to place like they had played together for a while, like they knew each other, like they loved each other.

Coach Combs told his charges as they broke for lunch, “There’s no more Belfry, Breathitt, Corbin, North Pulaski, nor Prestonsburg; there’s just we, there’s just Eastern Kentucky.” The message was clear…this group of all-stars were now a team, a cohesive unit.

That’s probably the hardest part too. Getting a group of all-star players to accept their roles, to just do their assignments, to play for that something greater than themselves, the whole greater than its parts. The Head Coach of the 8th-grade team felt the cohesiveness necessary to become a team had been achieved.

“It doesn’t even look like an all-star team anymore, does it? The camaraderie, the coaching, the players, and their accomplishing what we want from them; heck, even the timing, verbiage, and cadences…you would hardly know we haven’t been playing together all year,” Coach Combs told KPGFootball.

He was right. These boys looked like the sum composed of exceedingly good parts, who have been working in concert for quite a while. We believe that is called a team in “mid-season” form.

We are sure the other teams are doing well. None of these boys are “Joe Slappies” as we are fond of saying.

This won’t be new for many of these guys. This is far from any of their first rodeos.

We hope many spectators are permitted to watch these games. For those of you who have never seen middle school football played by players at this level of ability, it will be a sight to behold. Good luck to all the players out there participating.

Boys, one last thing before we take the field. It’s time men. It’s time to let the big hogs eat! Now, go out there and get ’em!