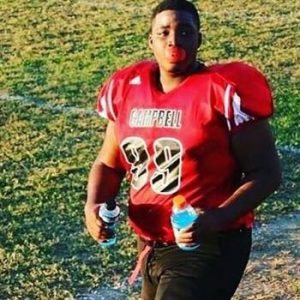 When you look at Quintrell Dixon’s 6’5″ 330 pound frame, it is hard to not have an expletive slip past the goalie.  I mean, what do you say about an 8th grader who is that big.  He has to be goofy and un-athletic as Hell, right?  Wrong!  I have had the opportunity to watch film on Quintrell Dixon and his pad level, hand violence and burst off the line of scrimmage is…remarkable.  One has to wonder how this kid hasn’t made every All-American Team in existence.  Now, what you can’t tell from a highlight film is what kind of motor the kid has and how many snaps he can give you before his conditioning renders him “just going through the motions” versus the domination I see in the highlight.  I guess we will just have to see, won’t we Tennessee?

Quintrell is slated to play for the Kentucky Future Stars in Clarksville in the Tennessee-Kentucky Future Stars game and this Man-Child from Lexington, Kentucky is listed as a NG.  I found his being listed as a NG interesting, from what I can tell, the Campbell Cardinals worked from a four man front and Quintrell was playing from the 1-3 technique.  What I don’t know, again, from a highlight, is how good or poor was the guy across from him; but Quintrell was getting through the O-lineman like he wasn’t even there.  Another thing I would like to note is D-linemen as large as Dixon generally move awkwardly (which Quintrell didn’t) and have a hard time getting in and out of a stance (which, again, wasn’t the case with Quintrell).  Quintrell had low hips and a flat back in his stance and exploded out, and not up, during his get off which indicates to me he has tremendous core strength and burst.

Kentucky Prep Gridiron believes Quintrell’s future in college, and he is a college football player right now unless he quits football, is at the Offensive Tackle position.  He moves well for middle school football but, at some point, his height and speed will be issues on the DL as a 0-3 technique player.  That point won’t be in high school, though, as he will be a day 1 starter wherever he is slated to play his HS football.  The formula looks as follows: Huge big man+great leverage+great burst + great get-off speed + active hands =big damn problem for Tennessee on either line of scrimmage on June 17 in Clarksville.  Sorry, another expletive slipped past the goalie…

Remember Quintrell Dixon, give me everything you got every play and…PLAY THROUGH THE WHISTLE!