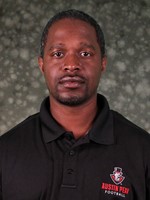 We at Kentucky Prep Gridiron don’t wait to get our information when everyone else does.  That’s why when CCMS announced it would introduce its new HC to the team this afternoon at 5:00 p.m., I decided I would let my subscribers know early.  That’s how we roll…If we don’t know before the announcement, why do you subscribe?

We have it on the authority of trustworthy sources from within the program that CCMS will announce Marcus Gildersleeve as its new Middle School Head Football Coach.  Marcus was one of the finest Clarksville-area football players to ever matriculate through the Clarksville Public School System (NorthEast High School) before playing his college football at Virginia Tech (1996-98).

Marcus coached at APSU in 2005 as cornerbacks coach after two seasons as wide receivers coach at Nebraska-Omaha. In 2006, The Governors Football Program turned over its receivers to Marcus’ care and development which netted immediate and evident impact producing, among others, Lanis Frederick, who set APSU records for receptions and receiving yards. In Marcus’ first season coaching receivers, the Govs finished with 199 catches, averaging 18.09 receptions per game, which stood, up until 2006, as the second-best all time. The 2,293 receiving yards set in 2006 also were the second-most in school history to that point.

In the mold of his mentor, Frank Beamer, the legendary Head Coach of the Virginia Tech Hokies, Marcus Gildersleeve proved to be an important “X” factor working with APSU’s special teams, in particular kick-blocking. Gildersleeve led the unit to its becoming an integral aspect of Austin Peay’s battle for field position with the Govs blocking six kicks in 2007 which was a school record up to that point.  Marcus also served the Governors as Recruiting Coordinator.  In all, Coach Gildersleeve was on the APSU Football Coaching staff for ten years; up until Coach Will Healy’s replacing Kirby Cannon in 2015.

Coach Gildersleeve was contacted for comment on this announcement and he refused to either confirm or deny he was taking over the helm of the Colonel Middle School Football fortunes.  Nevertheless, we welcome Coach Gildersleeve to the Commonwealth of Kentucky’s Head Coaching ranks at the Middle School Level and to Kentucky Prep Gridiron.  He inherits a talented roster that, under Coach Darell Keith’s guidance, was accustomed to winning.  I am sure Coach Gildersleeve will expect no less of the Division I Colonels. I am sure we will get to know him quite well.