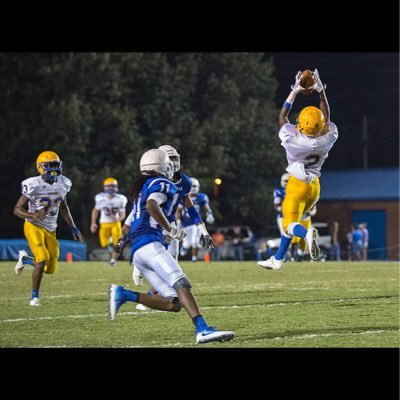 Well, we wrote about his cousin Trel Riley when we asked whether he was the best Corner in the Commonwealth. We come back to both the 2019 class and Caldwell County to tell you about Jameer Riley.  Jameer is a 5’11” 160 pound receiver-free safety who can line up outside and burn your corners over the top or align in the slot and work the middle of the field.  I can’t find a registered 40 or shuttle on Jameer but was able to access plenty of Hudl film. Jameer is either fast (he showed no problem pulling even then leaving opposing corners) or there are some 3A football teams on the schedule with back end speed issues.  In other words, Jameer looks plenty fast.

What jumps off the screen at the viewer is his length as his wing span well exceeds his height, which is ample for his position.  Another thing the film manifests is Jameer has excellent hands.  I hate to watch receivers catch the ball against their bodies.  Jameer high points the football and attacks the football with his hands which are soft, nimble and reliable.  For everything I said about Trel Riley and his prowess protecting the back end from aerial assault, the same can be said about his talented cousin, Jameer, and his ability to get separation from corners and/or safeties and then snag the ball from out of the air like plucking plums from off a fruit tree.

This next year, being the junior year for both the Rileys, is an important year in the life of their aspirations to play football somewhere on Saturday. Kentucky Prep Gridiron confidently predicts this will be a huge year for both and that they are both on the verge of blowing up on the recruiting trail.  KPG predicts Jameer Riley will be on several post-season All-State teams and will firmly cement himself on the radar of the many Recruiting Coordinators who are making a habit of trekking through Western Kentucky. These same RCs will be finding that trek winds them through whatever location houses the Rileys next season.  It will be a trip worthy of the effort.