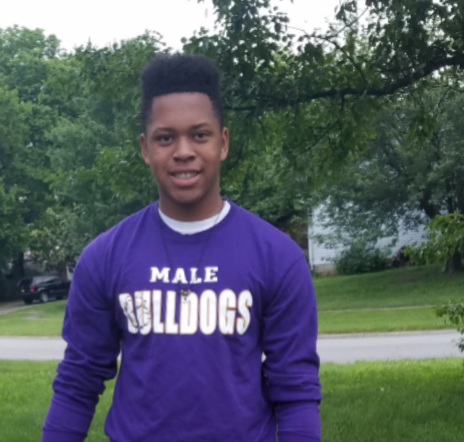 Pedigree in football may not be everything…but it is something.  Chadrick Dewberry played collegiately at EKU, and two of those years for the legendary Roy Kidd.  While this may not guarantee Cameron will follow in his Dad’s footsteps and realize football glory for himself, there is data suggesting it makes it more likely.

Stephen Dubner wrote in a blog entitled Football Freakonomics: Born or Made that we should… [c]onsider this fact: of the roughly 1,900 players on NFL rosters this season, 20 of them have fathers who also played in the NFL, or about 1 percent. That doesn’t sound like much, does it? But there are more than 20 million men in the U.S. of NFL age – and only 1,900 of them are in the NFL! That’s one guy for every 11,000 people in that age range – or about 1 1/1000th of a percent. How do you like those odds?

The truth is…Cameron is taking the guess work out of the equation by putting in the work to go along with his inherited anatomical gifts.  Dewberry, who it bears mentioning is only just turned 14, is 5’10” tall and weighs 193 pounds and is slated to play this month in Clarksville, Tennessee for the Kentucky Future Stars team. Cameron is new to the State/National circuit so he isn’t as well known as some players but think about this…Jaylin “The Boss” Bross has been the MVP of both the East-West Kentucky All-State Game and the Diamond All-American Game but his teammate Cameron Dewberry was the MVP at Barrett Middle School (BMS) this year, a team on which Bross played too.

Cameron is fast, 5.2 forty hand-timed, has fluid hips and violent hands, and once he gets his strength numbers to where they are headed he will be the devastating LB Louisville Male High School has him slated to be.  Kentucky Prep Gridiron expects Cameron will play DE for LaKunta Farmer in the game in Clarksville and we further believe he will spend a lot of time in the Tennessee backfield.

Cameron Dewberry is a future Saturday player, someone who will earn a Varsity Letter and see early playing time at Louisville Male High School in the Fall and an apple which didn’t fall far from the tree.