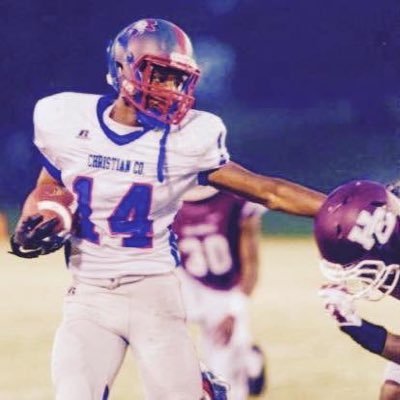 I had the opportunity to speak with a Recruiting Coordinator at a prestigious Division I, FCS school not long ago and the cornucopia of college level prospects dotting the roster at 5A power Christian County High School got discussed.  He told me, you know, out of every kid on the County roster, I believe Ja’Quon Long may be the player I have rated the highest.  That’s a mouthful, for sure, because County has a lot of outstanding talent.

JaQuon Long has had both the misfortune and good fortune of playing alongside the best receiver prospect in the Commonwealth of Kentucky last year, Purdue Boilermaker Keyron Catlett. He was fortunate because you could ill afford to double Long with Catlett on the loose; and he was ill-fated because playing alongside Keyron at the same position, with how brightly he shone, made it hard to be noticed yourself.

It would be a mistake to sleep on Long though as the 2018 prospect is 6’0″ 190 pounds with a bench press of 265 and a squat of 405.  Ja’Quon has good top end speed but what makes him really a standout is that Ja’Quon may well be, in terms of football IQ, the smartest kid on the field.

Ja’Quon plays WR on offense at County but projects to grow into a Flex End/H-Back type at the next level.  Long runs fantastic routes which are precise and always seem to have him open making him a real mismatch, and thus a tough cover, for 2nd level defenders.  Perhaps, most importantly, he has incredible hands and always rises up to play well against the best competition.  Last year, against the Purples of Bowling Green High School, the runaway State Champions in the 5A division and easily in the top 2-3 teams in Kentucky regardless of classification, Ja’Quon had over 150 receiving yards and was uncover-able by the Purples’ safeties.

When reached by Kentucky Prep Gridiron for comment, Ja’Quon Long’s venerable and well-respected OC, Rusty Goble, said the following…Ja’Quon is one of the better receivers in Kentucky and has been overlooked; but Long is the type of guy who will blow up as the season progresses. That is meaningful praise from a Veteran OC like Rusty Goble, I mean the offense at CCHS has averaged nearly 40 points a game the last two years so what would he know?  We think quite a lot.

When this happens, I would like this remembered…Kentucky Prep Gridiron predicts Ja’Quon Long will have a monster year on a loaded roster and will be heavily courted by Division I programs as his senior year progresses. Mark your calendar, remember this prediction, and for heavens sake…