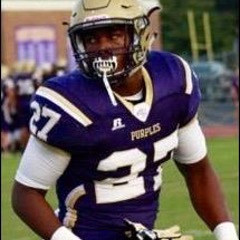 Justice Dingle is a 6’2″ 230 MLB/OLB who will suit up this Fall for the Bowling Green Purples after moving from Murfreesboro, Tennessee to Bowling Green, Kentucky.  I am sure this is a fact about which the Purples Coaching staff is elated.  The rating services have ranked Dingle anywhere from a three-star prospect to a four-star prospect depending on the service.  What isn’t disputed is he is the top ranked linebacker in the 2018 Kentucky Class and rated no lower than number 4 in the Commonwealth regardless of position.

Justice attended the Michael Vick and NPA V7 Elite Combine Series when it rolled through Nashville, Tennessee’s TSU Campus and left there the Defensive MVP of the Combine.  Of course, shortly thereafter Justice received an invite to the All-American Game in Atlanta, Georgia which will be played in December of this year. The fact he won Defensive MVP in a combine boasting 28 players rated four-stars or higher, coupled with his boasting offers from football powers like The University of Tennessee, The University of Kentucky, The University of Louisville, the University of Virginia, inter alia, makes it simple for Kentucky Prep Gridiron to go out on a limb (though not very far) and brazenly remark…so much for Justice Dingle’s being a three-star prospect!

Justice has the type of length, explosion, power, bulk and strength coveted by power 5 conference football powers.  On top of that, Dingle has the speed to drop into coverage, play the run, sideline to sideline, and still possess the pop to come up and fill the running lanes whilst blowing up RBs bold enough to try running at him.  Justice played Week-side DE when playing in Murfreesboro, so it isn’t inconceivable he could grow into a DE in college, but Justice has developed the physical tools requisite to stay at OLB or play MLB, depending on scheme and the need of the lucky school who should be fortunate enough to gain his signature on National Signing Day.

Kentucky Prep Gridiron believes Justice Dingle will climb the National Recruiting Lists as the season unfolds and as he continues to perform at combines commensurate to his V7 Elite Combine performance. KPG also believes Justice will end up a highly rated 4 star and may even rise to the coveted 5 star rating before it is said and done and will end this year Kentucky’s number 1 rated instate 2018 prospect overall. You can expect to see big things from Justice Dingle this year.